Hugh Myddleton was a Welsh-born Goldsmith who master-minded the New River, which brought fresh and ample water from Hertfordshire to London and was completed by 1620. One of many ‘Makers of London’, key contributors throughout our history who helped shape and make London the great City it continues to be.

Health and sanitation is a cornerstone of any developing nation and many of the health and fire problems that hit London across the centuries were rooted in the state of the city and its ability to house and keep well its citizens. Sir Hugh Myddleton was an entrepreneurial man, who saw an opportunity to improve the appalling sanitation problems in the 17th century and to make a profit from doing so. 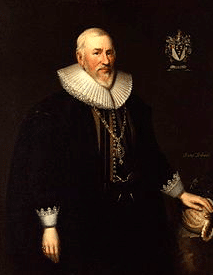 Who was Hugh Middleton ( Myddleton)?

He was born approximately 1560, and his family were Welsh and yes his name does not sound very welsh! This was because he was descended from a famous welsh warrior of the 12 th Century Rhirid Blaydd who subsequently married the sister and heiress of Sir Alexander Myddleton, who hailed from Myddleton in Cheshire and assumed his wife’s name presumably due to the prestige and ‘Englishness’ of the name. One of the warriors  descendants (Hugh’s father) Richard Myddleton was the 1st member of parliament for Denbeigh during the reign of Henry VII and also during the reign of Elizabeth Edward VI, Mary and Elizabeth I was also Governor of Denbigh Castle. In 1575 Hugh’s father Richard, died. Hugh was the 6th son of 16 children. He was born in  the middle of Queen Elizabeth I reign, during a period when a world of international trade and opportunity was opening-up for England beyond the known European bounds. He  spent his childhood in the beautiful Clywd countryside in Wales. As one of the younger sons it was common for him to have to leave home and find a way to earn his own living. 1576  in London, where his brothers had also sought their fortunes, he was apprenticed to Thomas Hartopp of the Goldsmiths’ Company. In 1592  Hugh appears as a livery man of the Goldsmiths company.

1597 he lived between London and Denbigh spending enough time there to also be an alderman of the town at that time, local records show that he was a merchant adventurer and shared this occupation with his brothers Thomas, Robert and William. Thomas and Robert both had shares in the East India Company(see our Empire and Colonialism theme). In 1603 he served as Member of Parliament for Denbigh . In 1604-1605 he becomes a Warden of the Goldsmiths company. Hugh whilst not involved with the East India company was an active member of the Society of Merchant Adventurers which was a guild or company dating back at least to 1204 that was formed by overseas traders. The British focus on Empire was mainly for trading ambitions and profit rather than domination of overseas territories. His Goldsmiths shop was in Bassishaw (now Bassinghall Street) and he lived above it. Whilst we know Hugh traded with European ports his main and substantial wealth was accumulated through his Goldsmiths trade and business. He had at least supplied jewellery to two Monarchs as documents show transactions for Elizabeth I and King James I for his wife Queen Anne. This was already an eventful life. 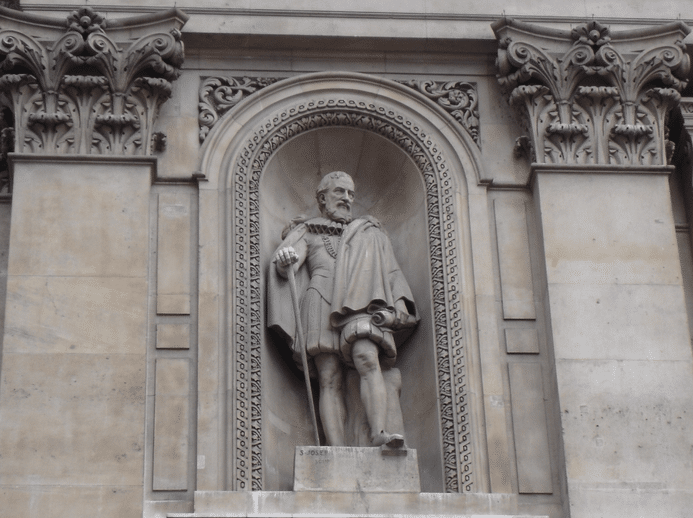 London was a dirty city. There was a continuous build-up of filth and poverty made much of the city very unpleasant to live in. Contaminated water was part of this problem as London. There was little distinction between sewage and drinking water and London’s early infrastructure incapable of supporting the growth as thousands flocked, quite literally to try and make their fortunes in London.

In 1605 both Hugh and his brother served on a Parliamentary Commons Committee to consider how to bring fresh water from the River Lea in Hertfordshire to central London. It was then that the seeds were sown but it was not Sir Hugh who would initiate the water supply project. The Corporation of the City of London formerly adopted the proposals for the new London Water Supply project in 1609. Hugh Myddleton  became Prime Warden of the Goldsmiths company and in 1613 his brother Robert, became Lord Mayor of London which coincided with the the flow of water into the large reservoir at what was the  New River Head and a 38 mile canal connecting to it.

In the same period that the project was started the King was still passing the Old Poor Laws to control those infected with contagious disease if they left the related infected houses. An example being “Charitable relief and ordering of persons infected with the Plague James I 1 c31” and related Acts which you can see in our survey of the Old Poor Law. The impact and spread of disease is also documented in related articles on the control.

In 1617 Sir Hugh worked the mines of the company of Miners Royal in Cardiganshire which was established in 1604. Previously an unprofitable operation Sir Hugh through his engineering feats turned around the project and mined so much  gold for the Royal Mint, that he was subsequently made a baronet. In 1622 Sir Hugh was made a 1st Baronet and was the first engineer to be so honoured. Hugh Myddleton  became involved in the project to create a clean reliable water supply not as the originator of the idea but as its saviour when the original engineers got into financial difficulties. With his diverse talents, knowledge, contacts and access to capital once he was involved he became the central driving force.

The plan was conceived as a construction of the ‘New River’ a supply from the springs at Amwell and Chadwell via the River River Lea at Ware the New River Head in London. It was dug-out and constructed between 1608-1613. It was a major engineering project for its time pre-dating by a long-shot the Victorian Canals which in themselves we find amazing feats with minimal automation. Imagine 38 miles of earth-works in early Stuart period, this was a major feat. The benefits were to the communities along the path of the supply and river not just those in the city across which the water was finally distributed. Originally running completely above ground, the New River was a controversial and ambitious project at the time of its devising. It relied on gravity to convey the water southwards into London, on terrain that dropped only five inches per mile. It met with considerable opposition from landowners who worried that it would devalue their farmland, but was strongly supported by the King James I, and opponents were eventually paid off with generous handouts of 50% of the river’s profits.The resulting New River, which is now mostly covered over and runs just East of Upper Street, was opened in 1613. 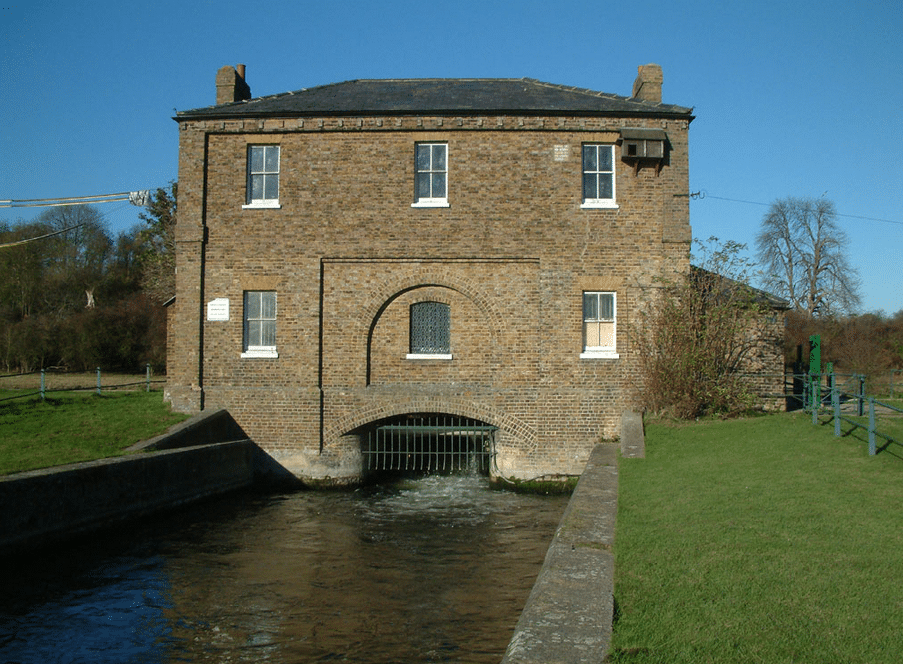 The legacy of Sir Hugh Myddleton 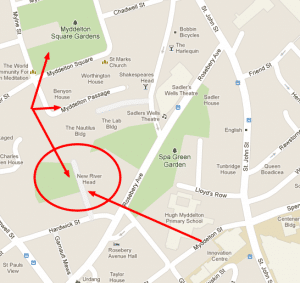 A lasting legacy Myddleton Square Street and New River Head:  the maps from 1844 and current show the marks left as a legacy on modern London. Sir Hugh maybe gone but he is not forgotten.

New River was finally completed and officially opened on 23 September 1613, giving Londoners their first clean water for dozens, perhaps even hundreds, of years. Hugh Middleton was a true Renaissance Man. He was interested in art and literature and also, as well as his traditional business interests in London and his community work in Denbigh, he developed and ran lead and silver mines in Ceredigion. He was created Baronet in 1622, a clear sign of the position he held and his significance in Stuart England. The system he created kept the capital supplied until the middle years of the 19th century until Joseph Bazalgette’s masterpiece of the Victorian Sewer System

Why is there is a statue in Islington for Sir Hugh?

Islington is on a hilltop  and this made it an ideal point from which to use gravity to pipe water into London. Originally the water was piped through wooden pipes drawing on natural springs at Sadlers Wells, London Spa and Clerkenwell, logically all three names with a clear water association when connected together. 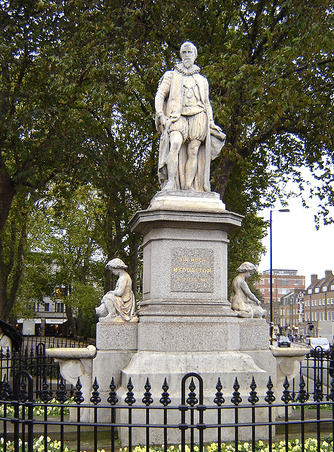 River Head is in present day Finsbury. It opened in 1613 and continues to be an important water source for Londoners even today. So next time you look up at the statue of Hugh Myddelton, you might want to thank him for providing 8% of your water!

For those interested in learning more about the New River, several walks have been devised, following the path of the river from Islington to Hertford. The Ramblers’ Association have more information and a free guide you can order here.

You can also see a few uncovered bits of the river while walking in and around Islington: part of it emerges in Clissold Park in Stoke Newington – there’s a picture here of how it looks today. It pops up in locations all over London, disguised as attractive water features.

The full path of the New River has now been plotted on to a google map, which you can view here.