How did Richard II of the Normans forge the 1st links between the Normans and the English?

Leading the Normans  some 40 years before the Battle of Hastings, Richard II of the Normans had come to terms with King Cnut  in 1017. He forged a link in providing asylum to his sister Emma’s children, which included the future Edward the Confessor.

Their father (Emma and Richard II of the Normans) was Count Richard the 1st of the Normans. Emma was in turn wife of Ethelred II the Unready (Edward the Confessor was their son) and to CNUT with whom she also  had  a son Harthacnut. Hence Emma and her brother are the connection that starts the links between the  English and Norman dynasties. Emma in particular was a strong and manipulative politician, she worked her powerful marriages and was one of few women in history to have two sons who would be King, by two powerful men and survived the failures of her 1st husband.

There is a source document ‘ 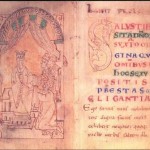 ‘ that relates and almost apologises for Emma’s role and career in politics. It was written by a Flemish monk in the 1040s, the quality of the information is patchy but it can be cross read in conjunction with other early historical documents.

But the importance of Emma’s role and Richard when he harboured her children including Edward, the future King should not be underestimated. This sparks the fires of a great dynasty that lays claims to England…and we all know how that developed by 1066.