Matthew Boulton could be described as the father of the Industrial Revolution but his name is less well known than that of his partner James Watt.

Matthew Boulton was born in Birmingham in 1728, the same year as Captain James Cook and into an age of enlightenment, reason and industrial revolution. His early years were spent studying and perhaps most importantly were spent watching his fathers business. Boultons father was a manufacturer. He made small metal decorative metal wares, items such as snuff boxes and needle cases. His small manufacturing premises developing out of a new age of metal. To the north of Birmingham in Shropshire the Darby family had discovered that they could make coke from coal and revolutionised the production of iron, a production process that had been carried out in England since the earliest times. It was to set in motion a massive change in industrial processes.

The child Matthew Boulton, may or may not have known what was happening in Coalbrookdale but he was a character with an entrepreneurial bent, who could see and seize an opportunity. Aged just seventeen Matthew Boulton had developed a technique for laying enamel onto buckles. It was a success and soon his father’s business was exporting the item to France. Matthew Boulton it seemed, had both a flair for engineering and design and the business acumen necessary to make money from it. In 1745 when Matthew  joined his fathers firm and learned the detail of the trade of metal work but he must also have seen how he could expand such a business and turn it into a manufacturing business the like of which the world had not seen. 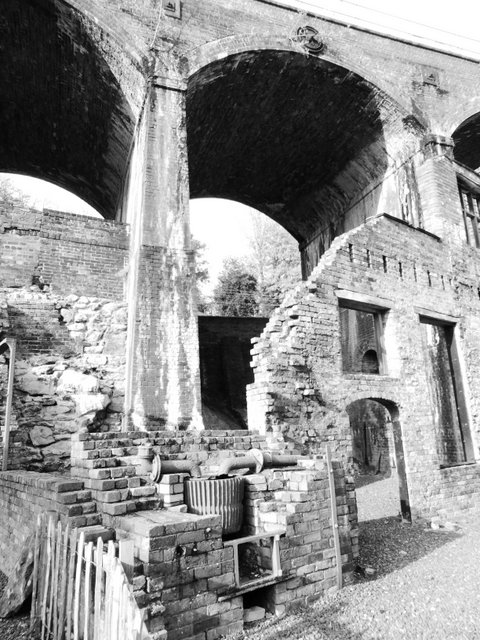 The Darby Works at Coalbrookdale.

He was named after his father Matthew Boulton, his mother was Christiana Piers. He had a younger brother who was born in 1724 but died in 1726 also called Matthew. He had other siblings, four sisters, Elizabeth, Mary and Martha and just one brother James.

Matthew married Mary Robinson in 1749. The Robinson family were known to the Boultons and they were distantly related. Her family were merchants and had built a considerable fortune and when Mary married Matthew she brought a large dowry with her. This fortune would enable Boulton to follow his own dreams of expanding his fathers silver stamping business and creating a ‘manufacturing’ business the like of which the world had never seen.

Matthews father died in 1759 when Matthew was just thirty one years old and in the same year, his wife Mary died. He had already endured the crushing sadness of the death of three children. Matthew Boulton then did a very unusual and at the time illegal act under ecclesiastical law, he married his wife’s sister Anne. Although such a marriage was permitted by common law anyone could oppose the marriage and as was often the case the couple went to London and there, finding a possibly impoverished curate to carry out the ceremony, they married. Matthew Boulton suggested to others intent upon the same action to employ ” silence, secrecy, and Scotland”.

The Partnership of Matthew Boulton and John Fothergill.

Matthew Boulton went into partnership with John Fothergill in 1762. Fothergill was a well educated man and had travelled extensively in Europe. The opportunity to seize some part of a European market must have seemed a totally logical move to make. Boulton was always quick to find a new market for his goods. The partnership lasted twenty years until Fothergill died but it was often acrimonious.

Before the partnership was agreed, Boulton took on the lease for thirteen acres of land in Soho, then on the outskirts of Birmingham. The land had with it a good solid house. This original house would be subject to much alteration and still stands, all that is left of Boultons ‘manufactory’.

This land, including common land which Boulton had enclosed was to become the base on which Boulton would erect his Soho Manufactory. The first factory of its kind in the world. The great building brought all processes under one roof. The workshops, design shops, commercial side of the business, the import of resources and the export of finished goods alll housed in one place. It was regarded as a radical and marvellous new enterprise. It was built at vast expense, it bled the two partners dry and they had to borrow heavily to get the project finished but once it was finished Boulton was determined to make it profitable and to do so he needed to find innovative products and processes. He needed a mass market and so produced goods made from silver plate and Sheffield plate, copper covered with silver. In doing so he made his goods affordable to the new ‘middle classes’, those who aspired to have something looking solid silver sitting on their dining table but was in fact pressed tin or copper overlain with a thin coating of silver. 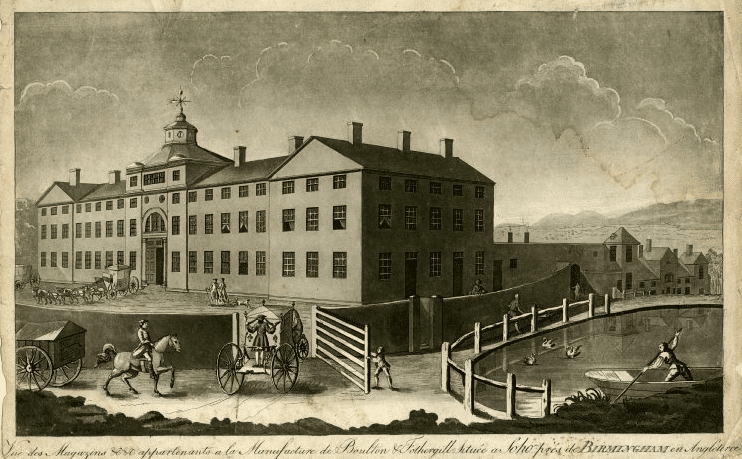 Matthew Boulton seems to have been a man unafraid to secure by one means or another, that which he wanted. He wanted an assay office in Birmingham. It was costly and inconvenient for him to have to send his goods to London or Chester to have his goods hallmarked. One of his biggest concerns was letting the goods travel to the London markets where others could rip off his designs. He saw that without an assay office in Birmingham itself he would lose control of his market and this he was not prepared to do. He went to Parliament and petitioned for a Birmingham assay office to be established. This was no mere feat. Opposition from the other assay offices was fierce. They would lose the business from the Midlands and so fought hard to oppose such a move. Boulton however succeeded in getting not only a Birmingham assay office approved but a Sheffield one as well. In that one move Matthew Boulton ensured the success of the Midlands industrial metal manufacturing revolution.

Moving on to Ormolu.

Matthew Boulton soon shifted his attention to more profitable areas. He had experimented with a new technique of applying gold decoration to ceramics. The product was called ‘Ormolu’ and it consisted of finely ground gold mixed with mercury which was painted onto the ceramic. The mercury was heated and driven off leaving behind the gold. The weight of the application proved too much for the ceramics and Boulton used stone instead to carry the decoration. 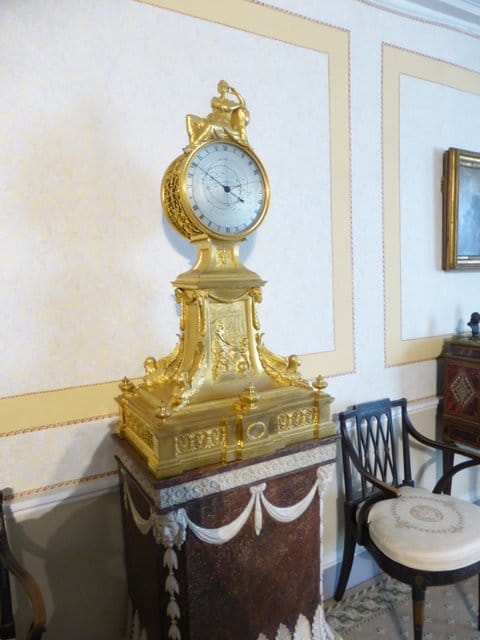 In 1766, Matthew Boulton moved his family to Soho House, close to the factory. It was probably a modest but well proportioned house but Matthew had ideas for it to become something of a show house where he could show off his wares to prospective customers and where he could entertain wealthy and influential people. He was supported by his daughter Anne, who, it is thought, had inherited his astute business sense. She lived in the house with him and seemed to be involved with some of the commercial aspects of the business. The house as it is now, is largely the work of architects, James and Samuel Wyatt. It stands as a testament to Matthew Boulton’s constant desire to test out new technologies and as such is an incredibly important historic house.

From external slate cladding, to the exciting colourful painted canvas floors, to sash window glazing bars made from an experimental metal alloy called Eldorado and the ‘holey’ staircase that allowed hot air to circulate from the central heating Boulton had installed, the house is bursting with experimentation and is a fascinating insight to Matthew Boulton himself. 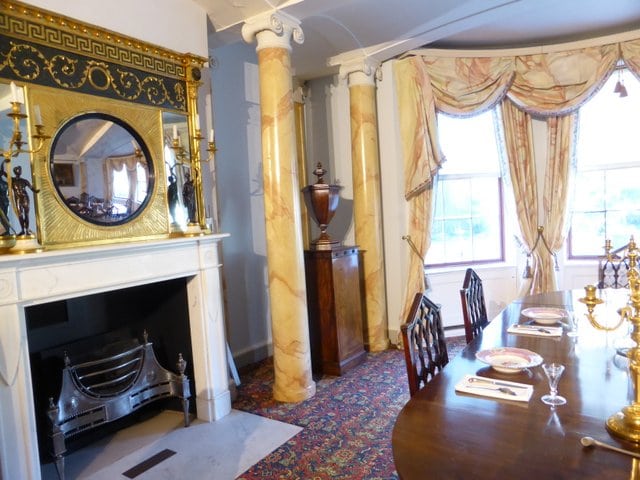 The sash windows made from the new metal alloy Eldorado. 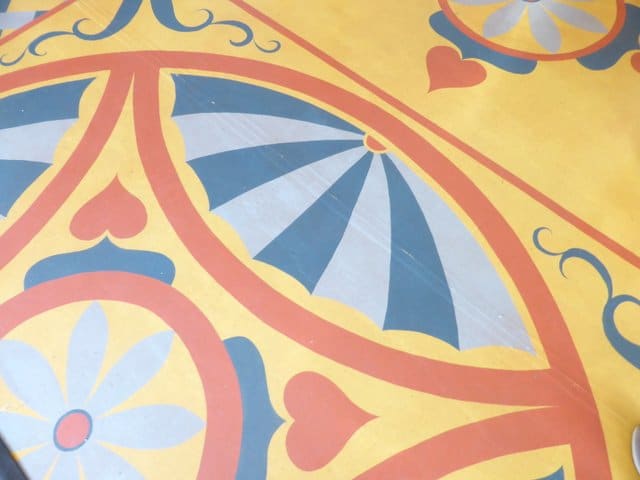 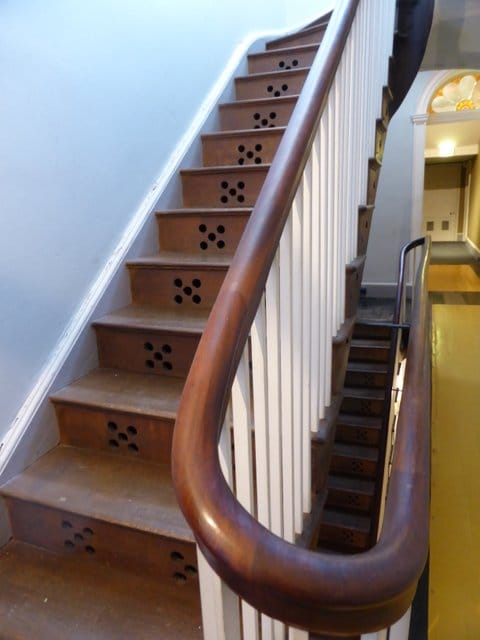 Soho House had a central heating system installed. The holes in the staircase allowed heat to circulate.

The house was the meeting place for the Lunar Society, a bringing together of brilliantly like minded people. They met in the dining room, now called the Lunar Room, each seated at one of fourteen mahogany chairs, scientists, thinkers and industrialists, sharing food and ideas. They were a collective of some of the finest minds and included Erasmus Darwin, James Keir and Joseph Priestly. 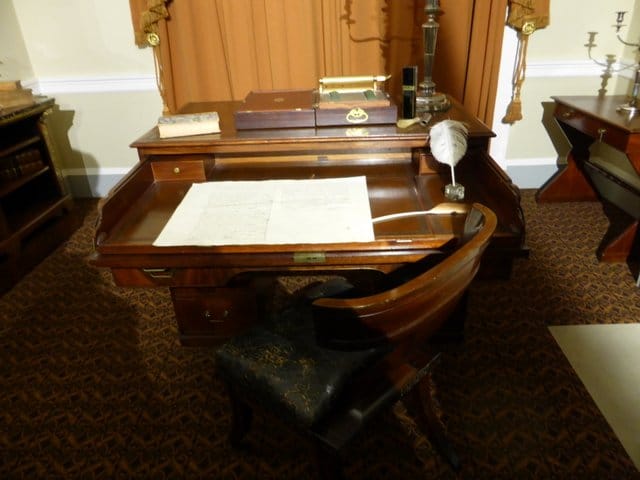 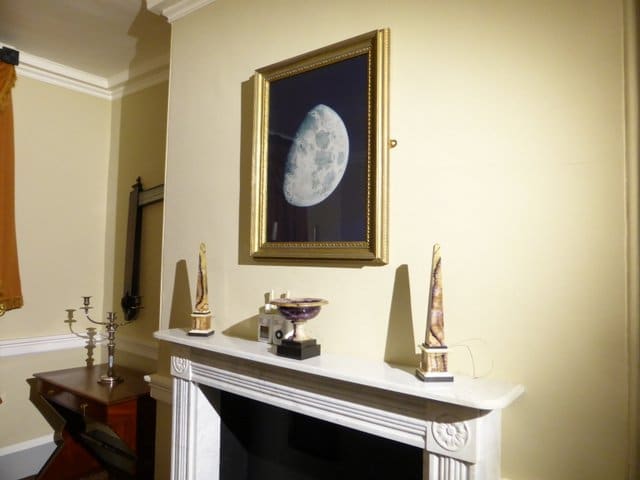 The Face of the Moon by John Russell c.1795 hangs in Matthew Boultons study.

It is his partnership with James Watt that Boulton is possibly best remembered for which is a pity given the scale of what he achieved. The two men began a correspondence in 1766 when Matthew Boulton was exploring using a steam pump to drive the equipment in his manufactory. Watt worked slowly though and it wasn’t until 1769 that he secured a patent for a greatly improved engine. Even then Watt was more interested in the engineering aspects of the engine rather than the commercial. Boulton however was the supreme entrepreneur and he saw the enormous possibilities of the steam engine. 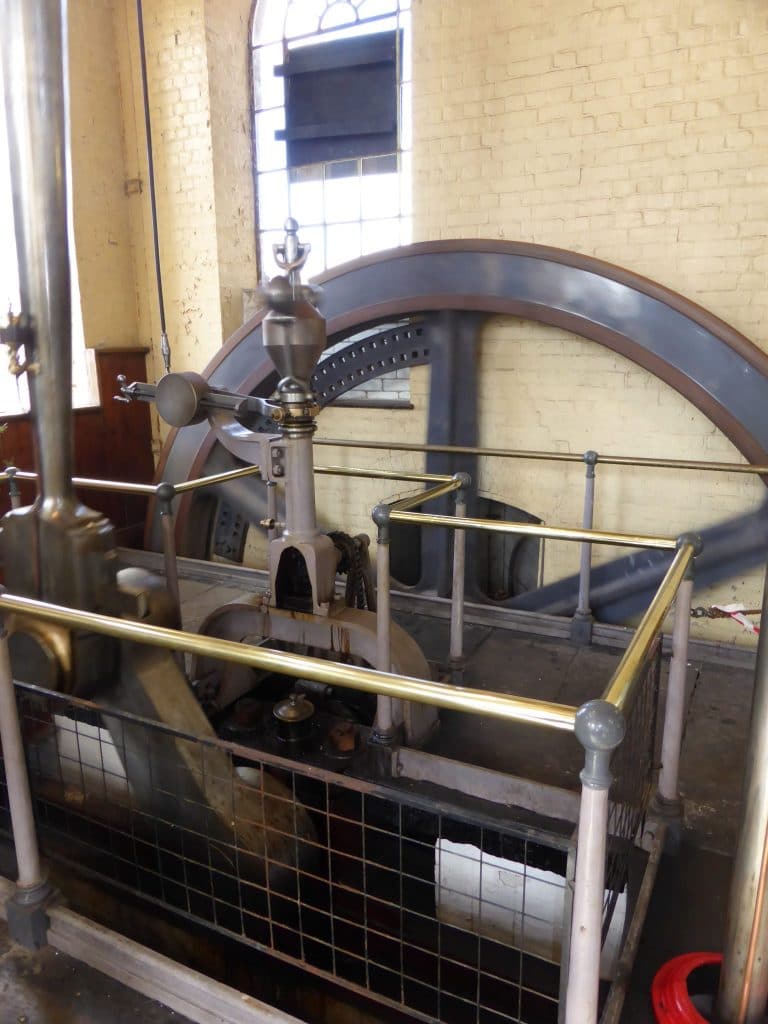 Watt already had a partner, Dr John Roebuck. John Roebuck had got himself into a financial mess. He owed money to Boulton and with shrewd foresight, Boulton took two thirds share in Watts patent as settlement of the debt. Fothergill, Boultons partner, refused the deal and took cash instead. Boulton then began marketing Watts engine, urging him to constant improvement. He was like a terrier at Watts heels refusing to let him off the hook. In 1774 he persuaded Watt to move to Birmingham and in 1775 they had formed a partnership. It took enormous tolerance on both parts and the marketing and networking skills of Boulton to make Watts engine a commercial success. Iron master, John Wilkinson was involved in manufacturing the finely bored pistons necessary. It was, ultimately, a gamble but one that paid off.

Matthew Boultons ability to find, seize and secure a market undoubtedly made James Watts career. Without the gritty tenacity of Boulton and his knowledge of how a business community works, the Watt steam engine may well have languished as a good idea nothing more.

The engines powered the mines in Cornwall and when that market was satiated Boulton urged Watt to make modifications so that the engine had a rotary motion, making it suitable for use in mills and factories. Watts was frequently exhausted by Boulton’s demands. By 1800 the business had produced nearly 450 engines and kept other manufacturers at bay with a tight patent.

“I sell here Sir, what all the world desires to have, power”

Boulton did more than just create the framework for a successful industrial business, he changed the way the government saw business, he persuaded politicians to be active in their support. He saw the importance of networking and bringing people together, he changed working practises to make it a fairer deal for workers. He was a man with huge reserves of energy and it must be said that when Matthew Boulton died in 1809, his contribution to Britain becoming the most advanced industrial nation in the C18th was enormous and we, as a nation owe him a huge debt of gratitude.