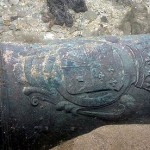 HMS Victory, the first, predecessor to Nelson’s flagship is to be raised from the seabed, 300 years after she sank.

She was launched on 23rd February 1737. Built as a high sided ship, she was thought to be unstable. Her cannon, which numbered about a hundred, were made of bronze and her crew numbered about 1000.

She sank in a storm in 1744, just off the Channel Islands and was reported as having large amounts of gold coin on board. All of her crew were lost.

The Maritime Heritage Foundation will be responsible for the site and artefacts.

It seems ironic that we value this ship and her historical cargo enough to raise her but the closure of the mighty Royal Dockyard at Portsmouth, from where she was built and launched, with it’s incredible attendant history, seems close to being sunk……
Sign up for free at Intriguing History, to keep updated with historical news and views. Make connections to your own family history and get help with tracking down those hidden resources.
</br>