On the recommendation of Joseph Banks, botanist and explorer, the eastern coast of New South Wales was selected to become the new penal colony to relieve pressure on the overcrowded prisons and prison hulks in Britain.

This was an ambitious undertaking by any standard and ‘farmer’ Captain Arthur Phillip, was the man selected to command the operation.

Let us take a moment to consider what was being asked and decided upon.

Convicts from all over the counties were meant to be taken to relieve pressure on their gaols but in the event most came from gaols in London and Middlesex. 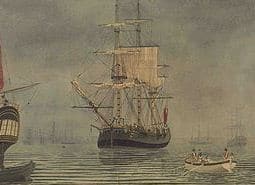 These prisoners were in a pretty awful physical condition, diseased and malnourished,  they would be at sea for months and when they arrived in Australia, there was much to do to make a settlement.

On board ship conditions were harsh. The convicts spent much of their time below decks, with a bucket for water and a bucket for waste, which was carried away on deck to dispose of. Despite this, the cramped conditions meant disease could spread very quickly and dysentery and cholera were common. Vermin also carried disease. They were given small rations of flour and salted meat. Exercise was limited to an occasional walk around the deck. Women convicts endured sexual harassment although some traded sex for food. In consequence venereal diseases were also a problem.
The officers and marines had better conditions, being given decent rations and living quarters. Captain Phillips was not a wantonly cruel nor a stupid man. He wanted his convicts to arrive well enough to undertake the work needed to secure the new settlement. A sick group of convicts was no use to him.

Eleven ships finally sailed from Portsmouth on 13th May 1787.

Approximately 775 listed convicts were on board. Click here for a list of first fleet convict names which has been compiled as a guide for those researching their ancestors. It is quite humbling to read the names of people who were removed so far from there home.

To find out more facts about the first fleet, there is nowhere better to start than Project Gutenberg Australia

To see contemporary news reports of the sailing visit The London Gazette .