The Vagrancy Act of 1547 grew out of a complex series of events and responses by the Privy Council who were looking after affairs of state after King Henry VIII died.

The young son of King Henry VIII, Edward was only nine years old when his father died. Henry realizing that as  Edward was a minor he would need a trustworthy and supportive Privy Council and elected 16 of his closest men to do the job. They needed a leader and Edward’s uncle Edward Seymour took the role and he became Lord Protector and Duke of Somerset.

The country was entering an increasingly complicated social and economic situation

The population of the country was increasing but employment opportunities were not. The English people found that life that was hard, was about to become even harder. Vagrants became more apparent on the streets and crime was increasing. Inflation was also increasing, goods were in short supply and a series of bad harvests led to an increase in the price of that most basic commodity, bread. 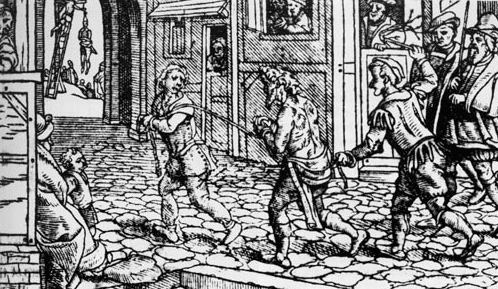 What the Privy Council feared more than anything was a public rebellion, with disorder and riots on the streets

The country was financially stretched by wars with France and Scotland. Taxes needed to be raised or England would have to lose face in her foreign policy towards France and Scotland. Somerset decided to coax the people in their support for the boy king. He removed unpopular legislation introduced by King Henry and allowed open discussion of religious views. He wanted to be seen as a reformer.

Ahead of the Vagrancy Act 1547, Somerset shut down the chantries, small religious houses with land and endowed with gifts to support the saying of masses for the founder. He closed them and melted down their gold and silver plate to mint coins. This exacerbated inflation and made public order worse.

Still desperate to control the problem, in 1547 he introduced the Vagrancy Act. This stated that any able-bodied person who was out of work for more than three days should be branded with a V and sold into slavery for two years. Other offences by the same individual would lead to a life of slavery. Many local authorities refused to enact this harsh legislation.

The act had many parts;

The slavery provisions were very unpopular and were repealed in part in 1550 just 3 years later. This series of enactments was creating the Old Poor Law and not only codifying but beginning to characterize and develop the roots of social welfare in British Society right up to and beyond the 1834 Poor Law Amendment Act.