The First Reform Act was passed in 1832, as a reaction to social unrest amongst the less well-off and against the back drop of the French Revolution the other side of the English Channel.  It was a tactic of Parliament to protect the interests of ruling elite by enfranchising a relatively small number of the overall population

This Second Reform Act 1867 was brought into law by act of parliament on On 15th August 1867. Again it was far from a Reform and more a reaction to the agitation and dis-disgruntlement of the ‘Working Class.’

It extended Suffrage to some degree but it was again a tactic and not a genuine commitment to giving all men and women equal rights to vote.

It provided for 9 new boroughs, the enfranchisement of London University, 5 additional seats to the North (Manchester, Salford, Leeds and Liverpool,) and various token additions for Chelsea, Hackney, the English Counties, Wales and Scotland but the numbers were small.

The right to vote was extended to all householders paying the poor rates and to all lodgers of one year’s residence, who paid annual rents of at least £10. Interestingly the County rate was different and higher. 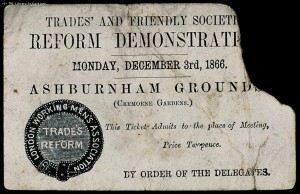 Corruption continued and whilst technically the voting population had increased the frauds skewed the impact of those increases. Two years after the Act had become law, 1869, only a third of all men were eligible to vote and yes, still no women.

The 2nd Reform Act had taken a further 35 precious years and still there was no real ground given to the entire population. The pressure cooker was  beginning to simmer, given the French Revolution maybe our ardour for radical change had dimmed but it is amazing that the Executive managed to stave off reform since 1832 for so long and when it came to give relatively little. The ‘Haves’ as opposed to the ‘Have-Nots’ seemed to have, at least for now retained control and delayed the inevitable that would not happen until 1928 and even then not without a fight.

The lesson here seems to be, don’t believe the name of an act , Reform can mean many things, technically yes it was called that but socially it was more of a minimalist compromise, and endeavour by those with incumbent power to essentially preserve the status quo.

If you are interested in the circumstances that led to full Parliamentary Democracy, one man or woman and one vote, then read on!