The Battle of Fulford Gate took place in Fulford Yorkshire before the Battle of Hastings. It was a hard fought engagement on 20th Sept 1066 at Fulford in Yorkshire England. 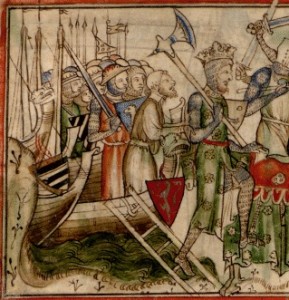 It was one of two battles that weakened Harold’s forces at Hastings having fought these two Battle’s in the North with the obvious drain on his forces and resources that resulted. The Normans ironically were helped by the Vikings and they would not lightly give-up their liking for York.

In 2012 Finding Fulford Project completed the contemporary Tapestry in the tradition of the Bayeux Tapestry and there is also a project and campaign to undertake and pursue the archaeological works and dig at the site. Whilst there has been some Lottery funding they are as ever needing some more. Find out about the Battle and then take a look at how history in the Yorkshire Community is literally digging-up their roots in the Viking/Danish and English conflict which culminated in another Viking (Frenchman from Normandy) winning the English Crown and establishing an impressive dynasty.

Hardraada was a fierce warrior who had professed himself King of Norway and had spent his life largely in exile as a violent ‘gun for hire.’  He was making his claim to the kingdom of England on the basis of a promise supposedly made by King Harthacnut to Hardraada’s predecessor King Magnus.

Harald Hardrada (the Ruthless) defeated the northern troops loyal to Harold who was marching north to fight with them. A contemporary window in Shetlaand

Tostig had proved to be unpopular as a leader and had provoked a rebellion even within his own earldom which had risen up against him in 1065. His brother Harold did not support hi to put own this rebellion and hence he has turned against him and joined forces with Hardraada.

Succession Crisis caused by Edward’s Indecision
This was all part of the tangled succession web and mess left by Edward the Confessor who seems to have promised his realm as he was childless to multiple potential heirs. Finally we believe he had settled on Harold of Wessex but his violent competitors were not likely to take ‘No’ for an answer. Hardraada is the

therefore uniting with the the aggrieved Tostig in open rebellion against Harold of Wessex.

Tostig was Earl of Northumbria, 3rd son of Earl Godwine of Wessex since 1055.

Tostig was unpopular and whilst brother of the King and earl in his own right, he had suffered rebellion in his own ranks. His brother the king did not come to his military assistance and hence Tostig is turned. He betrays his own House of Wessex and takes up arms with Hardrada. But his actions will cost his brother his realm and change the course of British History not in the direction he could have wished for. Tostig would not last long, he had maybe one more battle in him but it would not be at Hastings.

Edwin and Morcar, the Ealdormen of Mercia and Northumbria were fighting the invaders on behalf of Harold.

They were unaware that Harold had decided to march North to fight with them they might have waited and avoided defeat and the heavy losses that they would sustain as they were defeated at Fulford and have to regroup to do further battle at Stamford Bridge just a short time laer. On such decisions a thousand years of history turns. If the northern forces could have waited and supported Harold at a later Battle even at Stamford Bridge the impact and exposure to Harold and his men might have been more containable. But that was not he case this battle and Stamford Bridge Harold’s forces paid the price and by the time they force marched to do battle at Hastings they were already severely compromised and unlikely to succeed in conflict with William Duke of Normandy.

More resources to use view read and explore:

Here is our selection of areas to explore and resources you can use to give you both more detail and the wider context in whih this battle was fought. It is often mentioned as almost a trivial skirmish but the battle cost the northern forces dearly and ultimately combined with Stamford Bridge it would culminate in a mighty change of dynasty and arguably direction in British History. The Normans were coming, is this the start of the Anglo-French disdain, well not really, if as we now know the Normans were originally Vikings as well. But that is another subject, for another post.