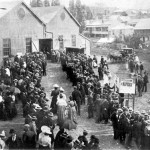 On 28th November 1893 New Zealand led the world by being the first country in the world where women were not only granted the vote but took part in their general election on that date. This was ground-breaking with rights of women established at the age of 21 and over. One of the leading women, was Kate Sheppard and her image appears on the New Zealand ten dollar note. The rights were also established for the indigenous Maori population equally, ahead of their time!

Intriguing isn’t it why a small remote nation should be so ahead given British women had to wait until as late as 1928 and in a nother former colony American women also waited until 1920.

What was different about NZ why was it so enlightened ?

For more information see our Womens Rights Theme and for more on New Zealand then take a look at NZ History where they have the transcribed list of the original New Zealand Women’s Suffrage Petition of 1893, it is a good site for getting deeper into what life was like for your relatives from or who migrated to New Zealand.