Publication of a Christmas Carol…19 Dec 1843

“Not that Dickens exactly believed in ghosts – but he was intrigued by our belief in them. “The Guardian Newspaper 2011.

Quite something to still be being talked about in current news isn’t it? Christmas Carol was published on 19 Dec 1843. It was written quickly (within 6 weeks ) with the extra motivation being Dicken’s financial need.

Dicken’s prefaces this short novel with the following

I have endeavoured in this Ghostly little book, to raise the Ghost of an Idea, which shall not put my readers out of humour with themselves, with each other, with the season, or with me. May it haunt their houses pleasantly, and no one wish to lay it.

Their faithful Friend and Servant, C.D.

Here he touches on philanthropy, with Scrooge’s resolution following a series of testing revelations, we see the best and worst of mankind and ourselves perhaps reflected back at us and Dickens’ inspired social perspective of the reality and what he aspired to…

“Scrooge was better than his word. He did it all,and infinitely more; and to Tiny Tim, who did not die, he was a second father. He became a good friend as good a master, as good a master, and as good a man, as the good old city knew…Some people laughed to see the alteration in him, but he let them laugh and little heeded them…His own heart laughed; and that was quite enough for him…and it was always said of him that that he knew how to keep Christmas well, if any man alive possessed the knowledge. May that be truly said of us, and all of us! And so Tint Tim observed God Bless Everyone”

The Victorians forged the modern Christmas, and Christmas Carol reflects the changes that were being adopted where Christmas is used to be a time associated with good deeds, as if it is OK as long as you do something good once a year…, the Christmas Card was invented, Prince Albert’s decoration of fir-trees was given much publicity in 1848 and we all know what became of that idea…

Dickens was a social chronicler and there are many detailed works that analyse the relevance of his literature and art from a social history perspective. But he was not a man of means from birth himself, the sona nd grand-son of domestic servants and facing a life of certain drudgery himself, he found the mechanism means and motivation to educate himself and become a notable author and investor in the development of philanthropy in times when there was no welfare state to support the less fortunate.

You can walk around Dicken’s London even now and future posts will tell you what is where, but for a quick insight into much that motivated Dickens take a look at Christmas Carol, maybe go see a production, , a good version brings alive for you and your family the essence of Victorian England and the importance of philanthropists in making society better for the less fortunate…now there is another debate to be had… 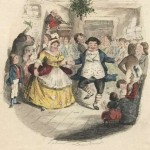