A great interview with Lord Carington aged 92, see the balanced view of Winston and what a character he is himself. Lord Carington is the last man alive to have served in Cabinet with Winston Churchill. Its a great piece and I love his attitude when asked about his plans for the next decade, he simply says to “Stay Alive”

”It was late October 1951, the day after the general election … man on a bicycle found me, and said he had Number 10 Downing Street on the telephone and Winston Churchill wanted to speak to me so could I come, please. I thought it was a joke.’’ Lord Carington of Upton, Life Peer and inherited his father’s title of Baron Carrington (2 rs)

“”I thought I’d better go and answer that call, though…And it was Churchill, offering me the lowliest position in his government: parliamentary secretary to the Ministry of Agriculture and Food. He said: ‘I hear you’ve been shooting partridges. Would you like to join my shoot?’ He was the loveliest man. Can you imagine any prime minister doing that today?’’

This piece stands on its own merits really but will be part of a series about our own collage or pastiche of our own intriguing portrait of some aspects of Winston Churchill in this his 50th year. Simply enjoy.

Peter Carington is well placed to give us an insight into Winston post-war, born in 1919 he was himself Defence Secretary, Foreign Secretary and Secretary General of Nato and holder of the Order of the Gater. 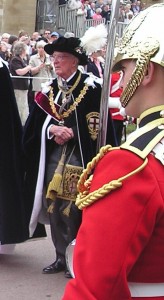 Seved in the Cabinets of Churchill Macmillan and Douglas-Home

He is not only the last man standing from Winston’s cabinet but also from Harold Macmillan’s and Sir Alec Douglas Home, whilst his hereditary peerage was removed he was created a life peer so that he could continue o sit and give wise counsel to those less experienced in the statecraft of British politics.