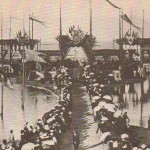 Opening of the Suez Canal

The Suez Canal was critical to maintaining Britain’s Empire and yet we came close to losing the control that was necessary to keep that passage secure.

Considering all this, it  seems strange that Britain refused to fund any of the costs to build the canal, in fact Palmerston did his best to thwart the project. The money came from the French and Egyptian governments.

The British were close to finding themselves in an embarrassing  position of losing  their position and advantage over the route and a great scramble went on to try and save the situation.

It was the insolvency of the Khedive of Egypt that saved the face of the British, they bought out his shares, acquiring a minority stake, just under half the capital, of the Suez Canal Company and in consequence strengthened and protected their route to India.