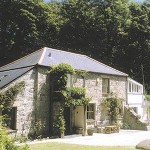 Here is just a little snippet, that will no doubt lead us to some track about the Arts Community in Cornwall and in particular around Penzance and St Ives Area. We were luck enough to enjoy a celebratory holiday at this house for my late parents Golden Wedding and it is really a haven of a spot.

In the flower loft itself above the front door there is a small balcony and the clear sight of brushes having been cleaned of pigment on the outside wall can still be seen today.

Lamorna Cove is a special place for me and this lovely home is well worth a visit for a great retreat in Cornwall.

Sir Alfred Munnings was the illustrator and friend of the Author Major General J E B Seely, who’s account of his War Horse Warrior from the first world war inspired the highly acclaimed stage production War Horse, which is now also a film.

“His extraordinary vitality, his joy in his work, none of us could forget him. He was a fighter. He fought the wind that shivered his easel and canvas. He fought the heat and cold. He fought the shifting sun and the changing shadows”.