Salvador Dali and Edward James collaborated on two artworks together in West Sussex?

May 11, 2012 / Comments Off on Salvador Dali and Edward James collaborated on two artworks together in West Sussex?

Salvador Dali, West Sussex and Edward James, what an intriguing combination?In honour of two extraordinary men and one great location which was Edward’s family home, here is a little snippet, Mae West’s Lips, and the Aphrodisiac Telephone (Lobster telephone. ) You can visit and see the works there even now.

Aphrodisiac Telephone alias Lobster Telephone (two versions 1 all white)
Does function follow form? Not a question that Dali was particulalry concerned about or was he. This iconic surrealist image strangely works although (pardon the fun) the connection between a lobster and the telphone might become a little odious and fish over time? Think what kind of mind dreams up this stuff, dripping clocks seem perfectly mundane by comparison.
Dali made the telephone in association with the pioneering British interior designer Syrie Maugham (1879-1955) for the home of the surrealist collector Edward James. This has become a classic Surrealist piece was among the most desirable 1930s original objects Now here is where it gets even more interesting and intriguing, in terms of the connections amongst the rich, famous and the talented. Certainly a bit of history repeating itself with wealthy patrons taking artists under their wings… 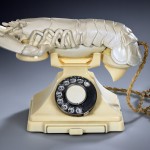 Syrie Maugham was a very successful wealthy and radical interior designer. Her initial success was founded on her radical all white rooms, for which the White Lobster Telephone was distinctively designed. what a creation for an interior designer, a product designed by one of the leading surrealist artists.

Yet more intriguing connections: She was very much part of society of the day as was Edward James. House Guests to West Dean included Edward the Prince of Wales and both he and Wallis Simpson were client’s of Syrie as were many socialites of the day. She designed Cecil Beaton inspired papers and again this resonates with West Dean which has many original prints of photographs taken and featuring Cecil Beaton again a house guest at west Dean.

Whilst the story of the connections to Syrie’s world may seem tangental, we see again how the extended circle and connections are more than a little intriguing: two artworks reveal a whole series of connections between a house, it’s guest and their susbequent lives. The number of open marriages between women and their overtly gay male partners leaves you wondering why women would put-up with such relationships? Syrie’s relationship with Somerset Maughan has a certain resonance with Oscar Wilde and the deep troubles that these marriages caused the wives in particular. In truth the publicly, the notorious become widely known but how frequent were such circumstances in less famous lives I wonder? A great price to pay for a love not truely requitted. But as ever there are always two sides to any family story…
All these connections and a tangled web from Edward James and Salavdor Dali in a remote country house in West Sussex and two iconic artworks! A great place to visit, can’t wait to go there again. There can be little doubt that the House and it’s archives have many as yet unrevealed connections that may in time unfold…People and personalities how they connect, who knew who and, who influenced what. This has got to be another 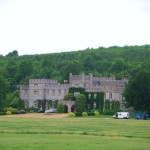 Rural England and it's American benefactors...

If you have an interest in the art, craft and many other humanities subjects you can enjoy at West Dean do try a visit. A walk in the expansive and stunning grounds, or a short course, preferably residential at very competive and great value fees is a must, if you can. It is a truely inspiring and creative environment with captivating and compelling objects and artefacts both inside and outside the main house, yes I am a fan. Thank you Edward, another great example of wealth turned to the advantage of the many in a great philanthropic flourish by it’s patron. Edward James was a character in his own right. Imagine the fatal and fascinating combination of dinner with Edward, Dali and whoever else was invited for the estate’s hospitality.

Edward James What an interesting man he must have been and what connections he made, in his life from 1907-1984 he lived life to the full and generously established a true cultural legacy of his house home and dream for the survival of the arts and craft movement by the establishment of his educational and arts foundation. Both during and his life and after his death quite a contribution.