Was Bologna University the oldest in Europe and what links it to a private chamber in the Vatican?

Wander the streets of the Italian city of Bologna and the essence of this Medieval university city seeps through the tessellated pavements of the portici. The C12th saw the introduction across Europe of what we would recognize as the great universities but one lays claim to an even earlier establishment, the school in Bologna Italy, founded in 1088. Bologna is situated in the Emilia Romagna area of Italy, the proverbial land of plenty and supported a free thinking and entrepreneurial people that defined itself during the Medieval period. Up until this time it had been ruled by the Papal Archbishops, who sought to restrict the expansive thinking that seemed to mark out people from this region. The city eventually managed to rid itself of this papal dominance and succeeded in establishing both a political and economic dominance of it’s own. 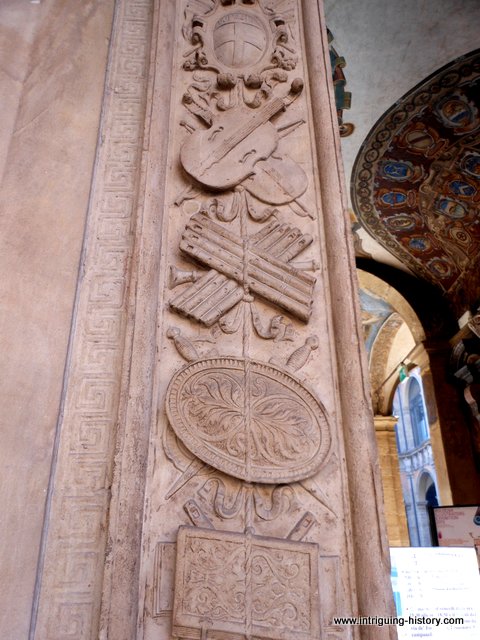 The transition from school to university

This learned and expansive thinking led to the establishment of a ‘studium generale’ in Bologna, thought to have begun as the cathedral school, the connection between church and school forged from the earliest times. This studium generale became a place where a significant body of learned people formed themselves into a structured organization, they were a powerful voice, attracting attention from all over Europe. A place where knowledge, challenge and crtisism could be freely adressed proved to be a powerful magnet, drawing academics from all over Europe. The studium generale evolved into the ‘universitas’, meaning the collective. A collective of ideas, principles and ideas. At a time when, for most people, survival was the greatest skill of all, how wonderful it must have been to join others thinking expansively about such cerebral delights such as music, science and art?

Through the teaching of rhetoric, the university became particularly renowned for it’s study of law but it was also undoubtedly the centre of music, philosophy and later medicine. Such was the education here, that one could become a Doctor of all the arts or a licensed professor of a particular one, as it was to be at Oxford or Cambridge University.

Bologna’s reach as a seat of learning stretched out to Spain, when, as early as 1364,  a Spanish School was established, which is still in existence today, with residences in a quarter of the city for those students who still come to Bologna from Spain to study here. 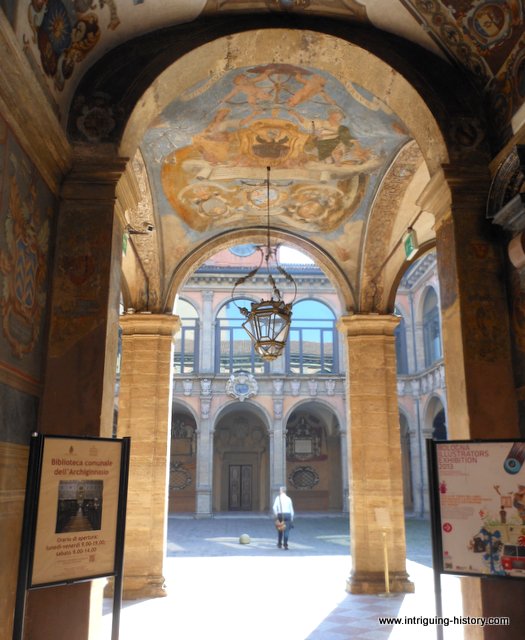 Imagine the portici filled with the sound of the fanfare of trumpets.

The academic and spiritual were bound together through music. Music pervaded daily life in the form of masses. In 1372 Pope Gregory XI established the Gregorian College and provided six priests to carry out religious duties, singing masses and providing liturgical music for academic ceremonies, binding the two sides of life ever closer together.

Records from the university shows that trumpeters could earn good money, especially if their fanfares were made from horseback. Music and dancing attracted the attention of university officials, who sought to reduce the lavish amount of money spent on such entertainment for the students.

Candidates for the award of a doctorate used to ride around the city with mounted trumpeteers, inviting friends and family to accompany him to the ceremony however this practice was eventually deemed too ostentatious and expensive and was outruled. The candidate was allowed a moment of celebration though, once the doctorate had been awarded, when he could be led from the cathedral by four trumpeteers.

What a spectacle through the streets that must have been, the rich terracotta coloured buildings with their arching colonades, the portici, acting as a background to music, colour and noise of the richly adorned Bolognese and their horses. 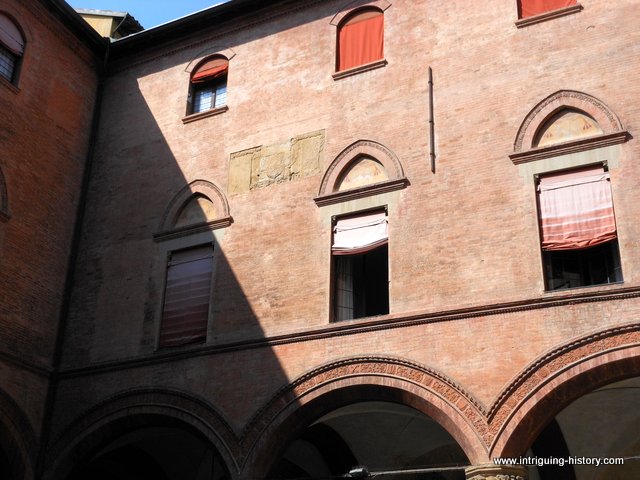 So what is left to reflect upon nearly a thousand years on from the founding of Bologna University?

The region, although richly Italian, also has the feel of  a very Euro-centric city, still embracing scholars from all over Europe. It is a city bursting with youth, the university is inescapable with a greater density of students than any other university in Italy. Great lawyers, scientists and musicians have spilled onto these streets, Marconi, whose work paved the way for the invention of the radio, Verdi and Toscanini, sons of Emilio Regano, the artist Morandi, Galvani, scientist and discoverer of bioelectrogenesis.

The frescoed Palazzo dell’ Archignnasio, was the original formal seat of the university and acts as a reminder of all those who passed through this place. The C17th Sala Anatomica, is another forceful reminder of the many stages on which academic plays have been enacted in this city. Europes earliest medical school was founded here and the university remains a centre of excellent scientific research.

And what of that private room at the Vatican?

So is Bologna University the oldest and greatest of Europe’s universities? It must certainly be a strong contender for the former but outstripped by the other Medieval European universities in the modern rankings. It’s Medieval origins however resonate throughout the portici and in the Vatican, in one of it’s still, private rooms, known as the Bolgna Room,  the most amazing map places Medieval Bologna at the very heart of Italy, whether in reality or imagination is not certain but certainly adds to the seductiveness of the idea that Bologna University was the beating heart of Medieval academia in Europe.

Find out more about the Map of Bologna, the Bononia Docet Mater Studonium 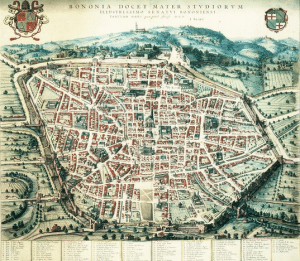