Derwent Dam and the Dam Busters

There is an intriguing connection between the industrial and engineering feats of the Derwent, Howden and Ladybower Dams, in the Upper Derwent Valley and 617 squadron of the RAF during WWII.  There is a plaque commemorating the  involvement of 617 squadron as pictured here at Derwent dam. 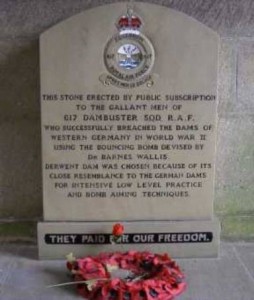 These dams and the surrounding terrain were the training ground for 617 also known as the Dam Busters, who attacked key German dams as mentioned in other posts. It was the perfect environment even if a little noisy and disruptive for the locals. The dam busters deployed the innovative bouncing bombs which were the invention and design of Barnes Wallis.

The dams featured again when the original feature film was made taking the nick name for the squadron as it’s title The Dam Busters.