The Battle of Mons Graupius

The men of the north, the clansmen, had tried to stay clear of open warfare with the Romans, preferring a guerilla war, similar to that fought between the English troops and Bonny Prince Charlies supporters centuries later. The Romans however had different ideas and took the battle to them, in the Highlands of Scotland. The Battle of Mons Graupius took place in 84 A.D. when the Romans marched on the main food stores of the Caledonians. Now, with their precious food stores under threat, what choice did these men of the north have but to stand and fight.

This was a battle on a massive scale, Julius Agricola, governor of the Roman force in England, mobilized 20,000 Romans. They faced 30,000 Caledonians led by their leader, Calgacus and defeated them easily. It was a decisive and complete defeat by the force of the Roman cavalry. Figures for those that fell were recorded by Agricola´s biographer Tacitus, in which he claimed that 10,000 Caledonians fell for every 360 Romans. A pinch of salt is probably required in interpreting these numbers but no doubt, an awful lot of Caledonians fell during the battle of Mons Graupius. 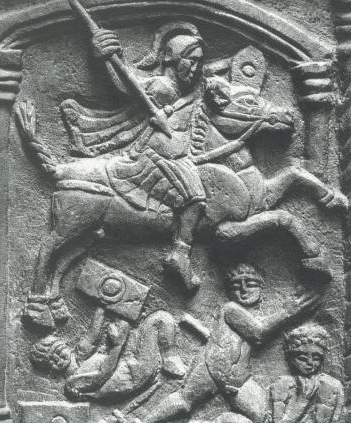 Where was the Battle of Mons Graupius fought?

It is claimed that after the battle, many Caledonians escaped into the hills. Later experience would say that this in all probability is true. These people knew the uplands, their lives depended on it. The actual site of the battle has never been confirmed but many suggestions as to the site has been made. Find out more about the Battle of Mons Graupius and its possible location.

Calgacus is the first Scotsman known to us by his name. The Roman historian Tacitus recorded the speech supposedly made by Calgacus to his troops before the battle, for recorded read ‘made up’, he needed to show them as a strong powerful enemy to show just how great the Roman victory actually was.

“We are the cream of British manhood. Until now we have remained in hiding, not even casting our eyes on the advancing tyranny. Shielded by nature, we are the men of the edge of the world, the last of the free. We will be fighting for our freedom so when the two armies meet let us show the invader what calibre of man Caledonia has kept up her sleeve.”