Arthur James Balfour was British Prime Minister and leader of the Conservative Party in he period 1902-1905. He was well connected, his uncle was Lord Salisbury Prime Minister with whom he served his apprenticeship as private secretary and subsequently as Chief Secretary for Ireland between 1887-1891. During that time he became known as ‘Bloody’ Balfour. In keeping with his background he was educated at Eton and Trinity College Cambridge, he was also a member of the Royal Society and British Association and a supporter of early genetics research, his brother being a leader in the field at that time. He was no intellectual slouch but largely viewed as an unsuccessful Prime Minister. His personal style being no small factor in his difficulties.

This quote alone shows that he was not known to be  man of the people and belonged more to the previous 19th Century rather than the pre-war climate at the start of the 20th.

“The General Strike has taught the working class more in four days than years of talking could have done.”

Arthur Balfour on the General Strike

He was a subtle thinker but not possessed of natural charisma a work of distinction being “Defence of Philosophic Doubt in 1879” in this work Balfour makes a powerful argument for intellectual liberty in the face of growing dogmatic scientism. Intriguing in itself but not our focus here.

Famous or Infamous for his ‘Balfour Declaration’ 1917

But Balfour is remembered most for the ‘Balfour Declaration’ a grand name for a modest and short letter written to a member of the Rothschild’s family indicating that the British Government were minded to look favourably on a home for the Jewish people in Palestine. Just two years later in 1919 see what Balfour says to Curzon a direct quotation:

“in Palestine we do not propose even to go through the form of consulting the wishes of the present inhabitants of the country….The Four Great Powers are committed to Zionism. And Zionism, be it right or wrong, good or bad, is rooted in age-long traditions, in present needs, in future hopes, of far profounder import than the desires and prejudices of the 700,000 Arabs who now inhabit that ancient land……….”
Balfour to Curzon 1919, maybe the meaning of the declaration is pretty irrelevant by then… 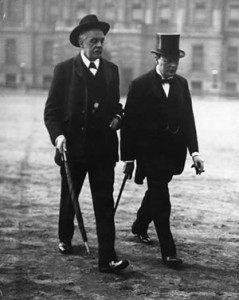 The intent and meaning and repercussions of those words continue to echo down the decades to the present time. If ever there would be an example of how even in a letter we should be very precise and economic with words that might otherwise be misinterpreted then this was it. But more of that later.

Balfour’s other accomplishments (whilst PM) were the Education Act of 1902 which essentially introduced local accountability and responsibility under the LEA system for secondary education, which would enable higher education to develop in the UK and deserves coverage in its own right in respect of its contribution to Social Change and Reform, so more of that later.

The Conservative party was also embroiled in its own internal divisions in respect of Tariff Reform and Balfour had tried to diffuse the issue by the creation of the Committee for Imperial Defence but this did not prevent a landslide defeat in the 1906 election which would lead to the Liberal government taking power. This in turn would  the People’s Budget to the House and cause an outright confrontation with the Conservative led House of Lords in 1908, casing a constitutional crisis in its own right. Arguably a domino effect. Not all down to the account of Balfour but his personal style or lack of it did not help.

Balfour was not a personable man, was aristocratic and aloof in his personal style and not a natural leader of men. Politics was becoming fierce and intense in the pre-WW1 environment  and the demands it made on its protagonists did not suit him. He resigned as leader of the Party having lost the 1906 election in 1911.

However whist he had resigned his absence was not permanent and he returned to office during World War I as Foreign Secretary in 1917 under the Lloyd George’s Coalition which having divided the Liberal Party was facing one half under Asquith as the official opposition, an extraordinary situation and was therefore increasingly reliant amongst Conservatives in its ranks. Ironic given previously they had been its opposition.

It was whilst Foreign Secretary, he wrote his fateful letter, for which he is largely remembered by historians. However was he just the instrument of policy or the formulator of it? Were those few words deliberately well chosen or just an act of random fate on a bad day? The subject is expansive and tied loosely into one of the main drivers of WW1 Imperialism or for Britain the beginning of the end perhaps as Victoria’s Empire placed Britain stretched across many borders, governing lands it knew too little about and defending against the competitive acquisitive nature of the Germans and the Kaiser?

Too much to tackle here but a key document is a short note the Balfour Letter as much as a ‘Declaration’ it reads more as a note between parties who knew one another well in social circles outside office hours. Plenty to explore here, so watch for our British Empire Tract WW1 and more to come as we research these areas from a number of perspectives. You can be certain we have not heard the last of that short letter yet or the last of Mr Balfour.

Whilst the Foreign Secretary had retired from the Commons he did of course get his place with the Barons/Lords and became the 1st Earl of Balfour. He had retreated from the demands of mass democracy not suited to his nature or abilities and represented the last of the late Victorian politicians to hold the Premiership.

More to explore: British Empire and Colonialism or Government and Power