What, where and why were the Anglo Saxon Burhs so important?

Firstly what was a Burh?

The Anglo Saxons did not build castles but they converted towns and developed them as fortified settlements. This innovation was developed during the reign of Alfred the Great and his successors. It was largely responsible for the success of King Alfred in avoiding outright conquest by the Vikings.

Whilst planning had been a feature of Roman settlements, this was in accordance with their own traditions.

In the development of the Burh, we see the start of English ‘Urban Planning’  building on the underlying blueprint of roads that had survived from their Roman forbears. The burhs utilised the existing fortifications and foundations and sought to secure the community in more densely populated communities. These locations were often strategically placed, along the coast and foreshore and at key geographic points. Initially established in Wessex by Alfred, later Burhs were developed in Mercia by his son Edward the Elder, his daughter Ethelfaed and her husband. The Burhs were instrumental in not only defending against attack but enabling the regaining of lost territory.

Aerial views of the Burh towns still reveal the imprint of the distinctive town plans, evidenced by archaeology, the earthworks and almost identical street plans that underly each Burh. The designs were not just about military needs, they were also about the markets and the mints, it was about economic growth emerging out of a period of Viking invasions, when communities had been left destabilized.

Where were they Located? – Map of the Known Anglo Saxon Burh’s

You can access the interactive Map via this link and we will be mapping the burhs into our main IH maps in due course. 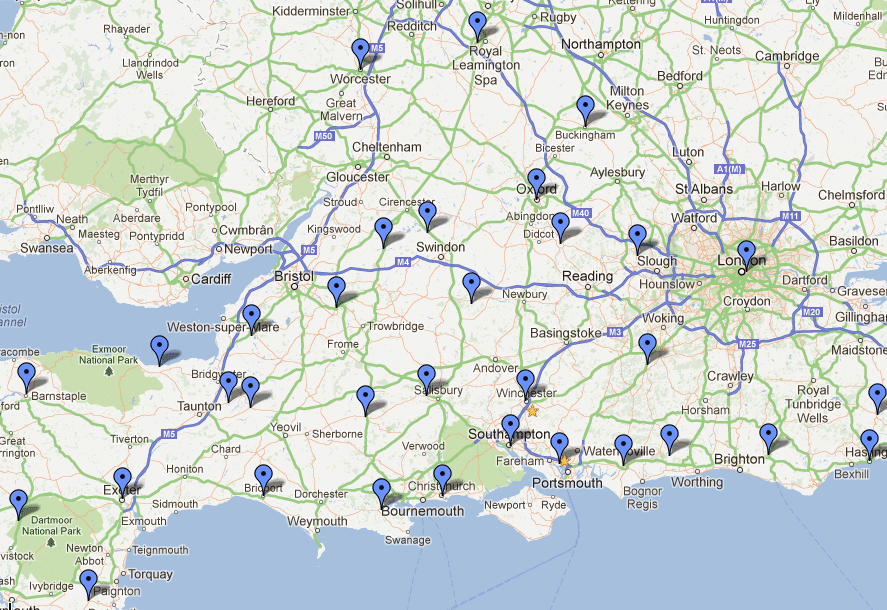 What was the Burghal Hideage and What Other Documents set out the Importance of the Burhs?

The Burghal Hideage is a fundamental document needed to understand the strategic planning that constituted the scheme of the Burhs as a defensive system. It was written after Alfred’s reign during the reign of Edward the Elder his son in the early part of the 10th century. It records as can be seen on the map, the number of Hides responsible for each Burh. A Hide was a measure of assessment for tax, tribute and military service. It was used until at least the 12th century as a unit of measure, not of area but of the amount of land needed to support a family. Hence the quality of that land could vary the area required. Each Hide was required to support and provide a warrior, and a ratio of 4 warriors was set for each 4.5 metres of rampart needing to be defended.

It is anticipated that this equated to a force of some 25,000 fighting men, a substantial force if all fighting cohesively across the range of burhs. There are 33 mapped above and listed in the Burghal Hideage. The document is also supported by accounts of Bede and The Anglo Saxon Chronicle which had also begun to be written if somewhat biased during Alfred’s reign.

These burhs were located primarily along the coast and the borders of Alfred’s lands.The numbers of 25k may have been on the high side, subsequent writings and records imply this may have been an ideal number. It maybe Alfred used only half fighting away from their own locations and half left at home, later rations suggest just 1 warrior for every 5 hides making the maximum force around 5k men. There were also some static garrisons that remained in specific locations.

If the lower estimate is true, then the volume of Danish invaders must have been quite small, if the force was sufficient to avoid outright conquest by the Danes and the compromise of Danelaw struck with Guthrum, with the division of territories  agreed. This supports the view that the Vikings came in smaller numbers than traditionally believed because unlike 1066, total conquest was not achieved during this period.