After The Battle of Waterloo

After the Battle of Waterloo

The Battle of Waterloo had been an exhausting and terrifying time for those fighting and for those civilians caught in the stitches of warfare. Brussels and the fields of Waterloo were left to deal with the injuries and corpses of abandoned after the battle. 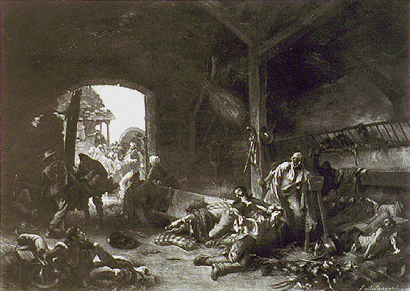 The Day after the Battle of Waterloo

Napoleon had fled and the streets of Paris filled with the rulers and nobles from Prussia, Austria, Russia and Britain. The weeks following the victory at Waterloo saw the best and worst of society, trumpeting their victory. Review after review, parade after parade, the goose stepping Prussians and toe flicking Russians could not out parade the Duke of Wellingtons soldiers. Despite their tattered uniforms and ragged banners, they swept down the Champs Elysees past the Duke and out drilled all the other nations. The British it was noted, were content to parade with little pomp, they did not apparently think of themselves as conquerors and showed the utmost respect for the French people and their property. This was in exact opposition to the Russians and Prussians  who blasted their way into peoples houses and businesses, causing mess and destrucion and terrorising as they went. The British it is said moved carefully and respectfully. They quartered themselves in barns or tents and within a week could only enter Paris with a special pass. They paid for what they consumed and any willful damage to civilian property was punished.

The British nobles were more victorious than the ordinary soldier

Many soldiers were invited into French peoples homes and it is said they helped with the chores and played with the children. The British in victory were humble and controlled.

Britain’s ability to rise so high militarily, without coercion, slavery or butchery was recognized as something extraordinary

The British had drawn all Europe together to defeat Napoleon and Revolution and had paid for a good deal of the war effort. It was only the British who had stood firm in the face of Napoleon. The Spanish had dissolved under Napoleons threat, the Austrians collapsed, the Russians were flitted and along with the Prussians lacked that critical authority. The states of Germany and Italy, threw in their lot with Napoleon.

In Britain though, social order had been maintained, her people remained free of military control and had their liberty. This freedom gave the British the courage and confidence to be self reliant and resourceful. They were protected by a law of the land that went back a thousand years.

So in the aftermath of the Battle of Waterloo, where did the power in Britain lie and how what did the victory mean to the people on the street?

The Sovereign’s power in Britain had been culled but Parliament did not have outright control. Less than a tenth of the population had the right to vote and landowners dominated the House of Commons and Lords. The country was not bound by a constitution, each parliament was free to change the law. But the freedom of the people to affect Parliament remained. There was no police force and only a limited number of soldiers to call upon in the capital London. The mob, if it so wished, could rule and when it had a will to, it did, damaging property and haranguing the politicians. Anyone standing for Parliament had to run the gauntlet of hustings where they would be subjected to a verbal and physical barrage. This was a right of the British people as fundamental to life as breathing. Whilst military victors may be held up as saints politicians never were. This was the liberty of the British people and why we fought Napoleon so fiercely. 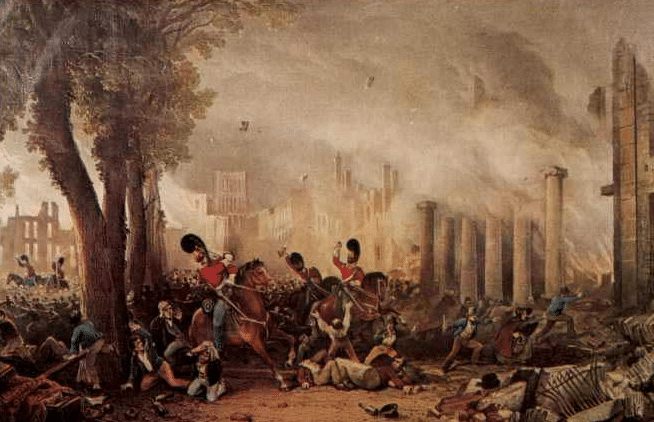 The British canonised its admirals but kicked its politicians hard.

William Pitt, the saviour of the nation during the war was vilified after it. There was a fine line drawn between the desire of government to control, all be it with a small army and no police force and the will of the people to rule themselves. A person may do as he pleased but if he infringed the rights of others, he would be dealt with in a court of law.

What then did the British expect after Waterloo and what did they get?

They expected to be better off. The population had been taxed to the hilt. Whilst the war had made many men rich, at its end came a depression that rocked British society to its roots. The people had expected the economy to lift and for work to be readily available. Alas the exact opposite was true.They expected that the ‘Terror’ of the French Revolution would not be visited on the streets of Britain. Several times as conditions worsened for the ordinary, poverty stricken household, Britain teetered on the edge of revolt. Thankfully, eventually, the need for reform to improve things for people was seen as the answer, not military force. The likes of William Wilberforce, Elizabeth Fry, John Howard and dozens of others strove for reform.

Britain in victory after the Battle of Waterloo staggered from crisis to crisis but without the insight to see what was happening to the poor, there was no solution to the problem. The starving poor felt disenfranchised from their nation and Britain needed to reform, quickly.