Why was William Tyndale’s attempt to translate the New Testament into English so important and what part did the Lutherans play?

As the Reformation swept through Germany, so books containing the doctrines of these reformists appeared in England. Martin Luther broke away from the church and in 1520, wrote and published a three part treatise speaking against the Catholic Church, denouncing the Papal system and the doctrine of the sacraments. His books arrived in England in early 1521 and Luther became increasingly popular. It is fascinating to consider the response of King Henry VIII to Luther’s work. He wrote a treatise against Luther’s views entitled Assertio Septem Sacramentorumor Defence of the Seven Sacraments, in which his vehement language leaves no doubt of what Henry thought at the time.

Just before King Henry’s work appeared all copies of Luthers books were collected and burned before Cardinal Wolsey in St Pauls. But not all the books were burned, some still languished in the libraries of the universities in Oxford and Cambridge and a good number of students were still attracted to Luther on both theological and morale grounds.

William Tyndale was one of these students. He was born in 1494 in Gloucestershire and educated at Oxford and Cambridge University where he became a strong supporter of church reform.

He was determined to translate the New Testament into English and traveled to Worms where he came under the influence of Zwingli, a leader in the Swiss Reform movement. Under his influence Tyndale began his translation adding prefixes to the text as it spun off the presses, strongly attacking the Church and its doctrine.

It was printed and moved down the Rhine through Holland and into Holland, making its way into England smuggled in bales of Dutch ware and Flander’s cloth. 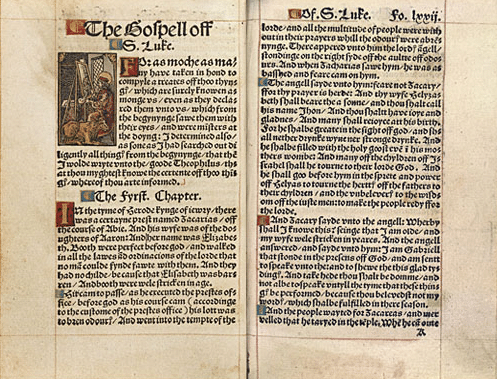 Tyndale’s book did not fall on infertile ground.

England was itself in a state of flux regarding the Catholic Church and not just because of King Henry VIII’s situation, which itself did not suffer from a total rejection from the people of England. There was already an old Lollard hatred of priests and their ‘crafts’ and a dissatisfaction with the state of the church existed throughout the country.

In the universities there was a feeling that the accustomed doctrine would have to be restated in view of a greater knowledge of the scriptures. It seemed an opportunity to sweep away the old and usher in the new but few would stand up and say so. Some looked to the future and watched the growing misunderstanding between the King and the Pope grow and saw an opportunity for themselves. Whatever the case, the ground was being prepared to accept the changes that were on their way.

William Tyndale Tyndale’s work was denounced by authorities of the Roman Catholic Church and Tyndale himself was accused of heresy.

He went into hiding and began work on a translation of the Old Testament directly from Hebrew into English.

Wolsey and Henry failed to track him down but ironically it was Henry VIII’s break with the Catholic Church in 1534, that made Tyndale believe it was safe to carry on his work in public. He lived openly in Antwerp but King Henry VIII was no supporter of Tyndale. Despite his argument with the Pope, Henry remained firmly and conscientiously attached to the old religious doctrine. He was a well read theologian who had no sympathy at all with the Lutheran and Tyndale’s teachings which struck at the very foundations of Catholic theology. Throughout his reign Henry meted out the same treatment to all declared Protestants, they were punished and suppressed and when Henry found the laws against heretics inadequate, he did not hesitate in making Parliament give him wider powers.

No, William Tyndale was not safe under King Henry VIII’s reign.

Tyndale was ultimately betrayed by his friend Henry Phillips. He was arrested and imprisoned. On 6 October 1536, Tyndale was tried and convicted of heresy and treason and put to death by being strangled and burned at the stake. By this time thousands of Tyndale’s New Testament had been distributed.

It was reported that Tyndale’s last words before his death were;

Just three years later Henry VIII published his English “Great Bible” based on Tyndale’s work. Henry could always see that change was necessary and was happy to gratify the demands that were being made for church reform as long as neither the Catholic faith nor the authority of the crown were impaired. The Reformation in Europe had cleared the way to allow some reform in England. From 1538, every parish in England was required by law to purchase a copy of an English Bible and place it in ‘some convenient place’ for all to see and read. Nine thousand copies were printed by 1541.