The tariff reform league – what can we learn from history as we enter negotiations for trade deals to come?

Our present government faces a new reality as the Brexit negotiations get underway and new trade deals are sought both inside and outside the EU. Trade deals and tariffs have always been the backbone of the UK’s economic success or otherwise and the establishment of Joseph Chamberlains Tariff Reform League in the first decade of the 20th century, was an interesting idea and adjunct to the free trade position of the previous century under the hand of Peel and then Gladstone.

In an overview of the Edwardian era we discussed the importance of this short period of history as being the divide between the old and the modern and politics in particular faced a shift in both expectation and action.

Joseph Chamberlain and why he set up the tariff reform league.

Joseph Chamberlain had been at the forefront of British politics since he entered the house of commons in 1875. He was first a Liberal and then a LiberalUnionist who played the part of the Radical politician with all his heart. His background as a self made man in industrial manufacturing meant he knew what was needed if British industrialists were to remain at the forefront of global trade. Once a politician, Chamberlain found it difficult to totally line up with any political party. He was a charismatic man who held strong views, he appealed to the public and because of this he could either a tricky ally or dangerous enemy. This had the effect of setting Chamberlain apart from his fellow members of parliament and led to him being a politician whose strong principles were often condemned.

As the Victorian period came to its close, Britain was already in a weaker position regarding its position as the leader in world trade. However it seemed as if success in the Boer War was a foregone conclusion and on the back of selling a victory to the British public, the ‘Khaki Election’ of 1900 delivered a Conservative – Unionist party, eventually led by Arthur Balfour. He was a skillful politician but he was accused of filling his cabinet with aristocrats and relatives. The one man who was neither of these things was Joseph Chamberlain. The Birmingham screw manufacturer was adept at stirring up radical opposition and dealing with the outfall.

Trade after the Boer War.

The damage done to Britains standing in the world following the disaster of the Boer Wars, was the beginning of the end of Imperial Britain. The Unionists were quick to exploit the situation in South Africa, encouraging the use of migrant workers to work the mines. The Liberals could not stomach the idea of what it termed ‘slave labour’ in South Africa and rocked Balfours Government with accusations of slavery. It was a difficult time in politics but Chamberlain had strong views about Britain’s role in the world and was not going to see all that had been achieved by Queen Victoria’s Britain, lost.  His position of Colonial Secretary in the previous administration continued to enforce his ideal that an imperialistic Britain was the future. He believed that trade would save Britain from an uncertain future and he sought alliances all over the world, trying to tie Britain closely to other major trading partners. In the aftermath of the Boer War he sought an Anglo-Afrikaner conciliation and worked hard to ensure that Britain had a major role in the newly emerging South Africa, he travelled extensively, forming pacts with those who would agree to enter into lucrative trade deals. All done to damp down the strength of both the US and the German economy. Chamberlain desperately wanted to be part of the Triple Alliance but did not want to lose sight of the Empire. Just as now as politicians seek to form new alliances post Brexit, so did Chamberlain at the start of the new century. He saw the need to strengthen Britain on all fronts, domestic politics, economic problems as Britain lost its foothold as the industrial engine of the world and internal part politic stresses. 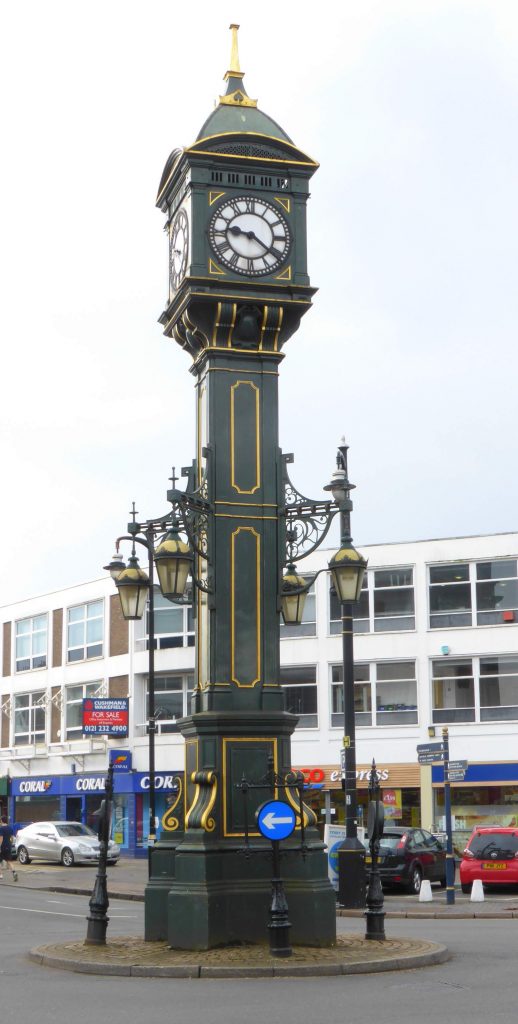 The Chamberlain Clock erected in commemoration of the 1903 visit to South Africa by Joseph Chamberlain.

Chamberlain starts to voice his ideas on tariff reform.

Chamerlain was, at first, a voice in the wilderness. He had one staunch ally though, in the figure of the Conservative, Lord Randolph Churchill. Both men were charismatic individuals who took on the establishment however when Churchill resigned, Chamberlain found himself a radical on his own and his dream of a cross party group of radicals fell away.

Chamberlain saw a Britain at the heart of a global trade, the puppeteer with all the other nations dancing to the British imperialistic tune. At a dinner at which Winston Churchill was present he would later recall Chamberlains passion for tariffs.

“You young gentlemen have entertained me royally, and in return I will give you a priceless secret. Tariffs! They are the politics of the future, and of the near future. Study them closely and make yourself masters of them, and you will not regret your hospitality to me.” 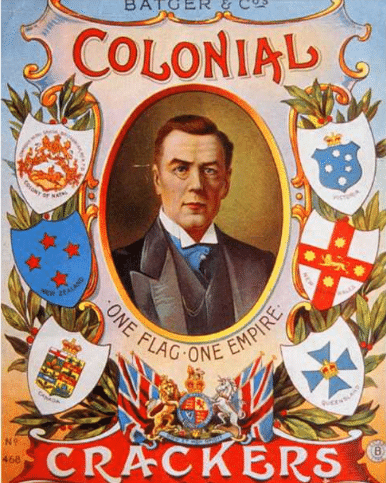 What did he mean by tariff reform?

His idea was to reject the free trade movement of the previous fifty years and introduce his campaign for tariff reform that would favour Britains Imperial ties. The reasons behind the adoption of free trade have their roots in the Corn Laws and the economic depression that arose in the 1840’s. The formula would be for imperial preference in trade and tariffs. He would achieve this by imposing a tariff upon on certain foreign goods, in essence exclude them from exporting to Britain but then to waive this tariff in the case of imperial products. He proposed to impose tariffs on grain imposts, under the new rules the Canadians would benefit, being exempt from the tariff. Such a measure was contentious and Chamberlain was urged by the Liberals to think again. Chamberlain was thinking of the industrial heartlands of Britain which were losing out to cheaper imported goods, he was at heart still a manufacturer from Birmingham and he was not prepared to see the manufacturing base of Britain collapse under the threat of cheaper goods flooding the market from all corners of the earth under free trade. But free trade was also something the Conservatives understood, the City of London thrived in the free market as did those in the textile industry whose raw import, cotton could be freely negotiated. Therefore they were cautious of his ideas and unwilling to offer him much support. The Prime Minister Arthur Balfour would not commit himself either way and when it became apparent that the Cabinet were not willing to cast free trade adrift, Chamberlain resigned.

In May 1903 Chamberlain stepped away from the Government and put his entire intellect and personality behind the Tariff Reform League. It was an immense propaganda effort, the determination of the reformers was felt by every working man and woman in the country. 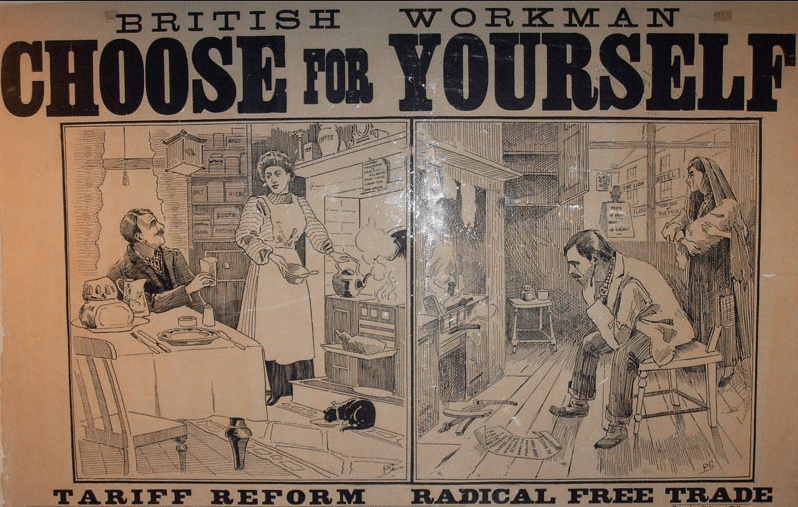 Some in the Conservative Unionist party threw their support behind him but the Liberals and the newly evolving Labour party rejected the idea. Balfour lost control and tendered his resignation in December 1905. The Liberals seized their opportunity and swept into power in January 1906. Chamberlain suffered a stroke in the same year and was unable to take the campaign forward.

The debate continued to rage but it was an uphill job to present the new tariff deal to the public. Chamberlain had wanted to use the income from tariffs to pay for a workers old age pension and for other workers reforms but it was hard to argue the case when exports were increasing and unemployment falling, how could it get any better? The Liberals and in particular Herbert Asquith used an image of a ‘big loaf’ secured by free trade as opposed to a ‘small loaf’ representing the small gains for the people under tariff reform, support for the campaign waxed and waned over the next few years. 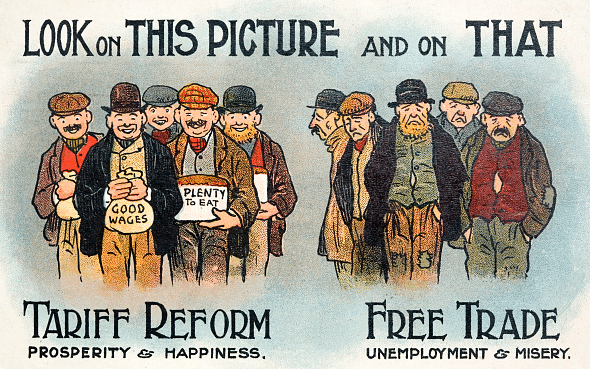 Then in 1909, Lloyd George introduced the People’s Budget, the ensuing controversy which ensued culminated in the Parliament Act of 1911 and the issue of Tariff Reform lost ground. Free trade was allowed to continue and the market forces that resulted were laid bare in the turmoil in the tumultuous international politics that evolved pre World War I.

Joseph Chamberlain died in 1914 and so did his ideas of Britain rising as an imperialistic trading giant, creating a global trading hub with Britain at it’s centre. Chamberlain had shown a different way of doing trade and spoke of tariffs as something that could be harnessed to create a new society but society at that time rejected tariffs and it would take another decade and a half before tariffs were once more brought to the political table.

The grittiest part of the Brexit negotiations will be over trade. Brexiteers will argue that you do not need a trade deal to trade and this is apparent when we consider America who does not at present have a trade deal with the European Union. But without a liberal and comprehensive free-trade deal with the EU, British exporters could face tariffs and, especially, non-tariff barriers, where it currently faces neither. Tariff reform will affect all who reside in the UK but are we in danger of not understanding the implications? Maybe a modern day Tariff Reform League would be a good way to help explain the changes coming in our newly evolving post Europe Britain.