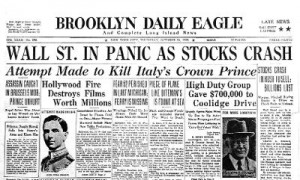 The crash of the Wall Street stock market in October 1929

A timely reminder of how hard it was for families to come through such a collapse, with the ensuing unemployment that followed, can be followed in the link to the New York Times