Sitting in the dining hall of a school in the 1960’s was not a happy experience and one that many of us balked at but the provision of a school meal was a gift to many children at the turn of the 19th century.

In 1904, the Interdepartmental Committee on Physical Deterioration found so many working class families to be malnourished, that it gave advice on better nutrition for families. By 1906 it was decided that children from the poorest families should be allowed free school meals.
The School Meals Act 1906, gave local councils power to provide free school meals

Local councils did not have to give children in their area school meals, they could choose, which seems now to have been a very unfair system. Money to provide these meals however had to be raised from local tax payers and so therefore was not universally adopted. Parents could be asked for a contribution to the meal but only if they could afford it.

Who made the decision to implement the School Meals Act 1906

In 1906 the Liberals won the general election. There was a move away from old Liberalism towards a more interventionist, new Liberalism and although this came later in 1908, the appointment of Herbert Henry Asquith as Prime Minister and David Lloyd George and Winston Churchill to the cabinet, the government sought to identify and help, those in society who were in need of help, the young, old, sick and unemployed. The germ of these attitudes can be seen in the School Meals Act 1906.

It was not a Liberal who proposed the act though.

It was Labour backbencher, William Wilson, put forward the idea of free school meals as a Private Member’s Bill. He did so because it became obvious to people who made it their business to find out, that many children were turning up to school hungry. They were often unable to focus on their education as lack of food made them lethargic and unwell. Margaret Macmillan, an educationalist said;

Feed the stomach, then the mind 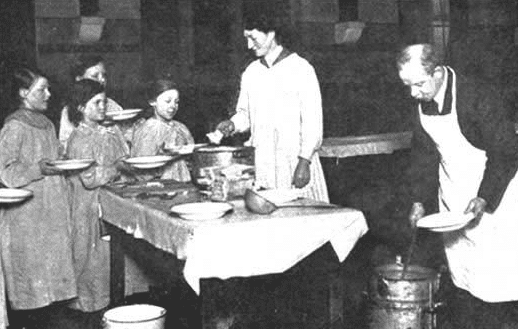 Free school meals being served as part of the School Meals Act 1906.

The result of introducing the School Meals Act 1906

In conclusion, it was a step in the right direction and along with other acts, put the needs of children on the political agenda. To see more acts visit our timetable of acts on our Law and History page.