May 13, 2012 / Comments Off on Richard Feynman Physicist or artist, you decide…

It’s all too easy to forget great minds, great thinkers, people who, had they not lived, the world would have been a poorer place.

Richard Feynman would have been 94 years old this month.

He was a physicist who took the world of sub atomic physics, shook the tree and gathered up all the maths, science and philosophy that fell from it, and gave it to the world.

He realised that the mathematics involved in the field of sub atomic physics would defeat the best brains and so he sought to make it accesible to those who wanted to understand.

The Feynman diagrams and this is from a physicist who would love to understand,  gave a pictoral representation for the behaviour of subatomic particles and helped others to embrace the new science of Quantum Mechanics.

He is credited with being one of the world’s top ten physicists and we have much to owe him.

Watch this humbling video of him explaining why for him Dirac, the English theoretical physicist, had made such an impact on his life and enabled him to become the man and the physicist he was.

He assisted in the development of the atomic bomb and was involved in the investigation of the Space Challenger disaster.

The impact of people such as Feynman often fall by the wayside, what they did is difficult to understand and yet it is incumbent upon us to present it in such a way that we can all understand and learn.

So…… Yet again another intriguing connection between the world of science and art….. 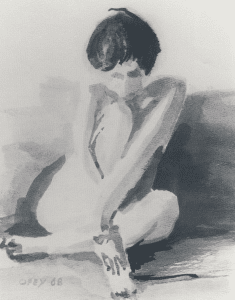 How many times do we see great minds crash into the realms of  science and art, almost as if the two danced around each other. It takes massive creative thought  to give birth to world changing scientific ideas and it’s almost as if all that creative energy spills into art, or is it the other way round?

Find out more about his life and world