Joseph Banks was, quite possibly, one of the most important and influential men of the late 18th century, early 19th century.

Born into wealth he was able to indulge his interest in botanical science from an early age. In that, he was fortunate but it was his driving intellect, his intense pursuit for scientific knowledge, his ability to communicate and his role as liberal benefactor, that created a personality whose achievements we still enjoy and are amazed at today.

Joseph Banks interest in Australia did not end there.

He championed the settlement of New South Wales as a penal colony, from the start and remained connected with this cause all his life. The captains of the ships sailing there, would collect animals and plants for him. 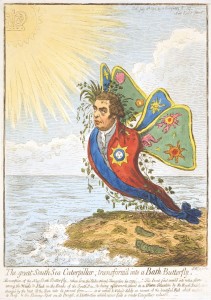 Sir Joseph Banks was made a Knight of the Order of the Bath in 1795.

His interest in science and life did not stop there he belonged to numerous societies and clubs:

He was also on the board of many committees, Banks was a practical man whose fine intellect allowed him to converse across a multitude of subjects.

An ‘enlightened’ man certainly, whose influence and connections were far reaching.

Find out more at the Joseph Banks Society.