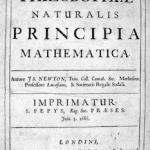 Alternatively titled “Mathematical Principles of Natural Philosophy” why the heck is that significant to your family history…?

The impact of not only the maths and science contained in this document had a massive impact on how the world and in particular English society developed. The period of the Enlightement, was key in seeding thoughts and values which were to spark leaders of thought and the subsequent good deeds for the next several hundred years, and still do so today. The intellectual rigour, rational method and principles of scientific method were of fundamental significance to the world your family would inhabit.

Intriguing Connections between Newton, John Locke, Lord Shaftesbury and Florence Nightingale, the impact of the enlightenment period on society and social reform…

Galileo, Boyle, and Newton principally inspired the philosophers of the Enlightenment  period with reference to the concept of nature and natural law to every physical and social subject of the time.

It was Newton’s conception of the Universe based upon Natural and rationally understandable laws that became one of the seeds for Enlightenment ideology, as examples;

“It was perhaps the force of the ‘Principia’, which revealed so many different things about the natural world with such economy, that caused this method to become synonymous with physics, even as it is practiced almost three and a half centuries after its beginning. Today the two methodological aspects that Newton outlined could be called analysis and synthesis.”

“Isaac Newton’s statement of the four rules revolutionized the investigation of phenomena. With these rules, Newton could in principle begin to address all of the world’s present unsolved mysteries. He was able to use his new analytical method to replace that of Aristotle, and he was able to use his method to tweak and update Galileo’s experimental method. The re-creation of Galileo’s method has never been significantly changed and in its substance, scientists use it today.”

During the period after leaving Trinity College Cambridge, Newton had returned for the two years when he was composing Principia to Woolsthrope in Lincolnshire, with a view to avoiding the ravages of the Great Plague both in London and Cambridge, we might have waited a long-time for the progress his work brought, if he had not avoided the plague. This was his family home did you have any relatives living in the area?

For more on the Period of the Enlightenment click here

Free Download of the ebook available in the Internet Archive and Gutenberg Projects, click here for Principia Mathematica by Sir Isaac Newton published 1686-1687. English translations from the latin can also be found online in paper and ebook formats from the main sources of Amazon, Gutenberg, Book Repository etc…