Mary Anning was born in Lyme Regis Dorset in 1799

She was the daughter of a poor cabinet maker in the small town of Lyme Regis on the Dorset coast. To supplement their income, Mary and her father would scour the beach looking for fossils that they could sell in their shop.

On one of their expeditions her brother Joseph found a skull, still set within the cliff. Mary painstakingly uncovered the whole fossil and it was sold to the local lord of the manor Henry Hoste Henley who sold it to William Bullock for his Museum of Natural Curiosities in London. 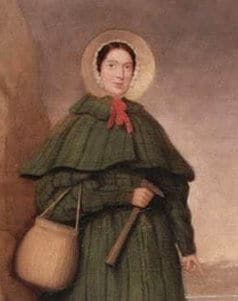 The specimen was later named Ichthyosaurus

It caused great excitement amongst paleontologists, the ‘fish-lizard’, had never been seen before.

Mary Anning’s skill in uncovering the fossil was remarked upon and she was encouraged to undertake more exploration which was fine and good except that the family were still near destitute.

Mary Anning was well respected though as having a good eye for fossil hunting and one of their clients generously auctioned some of their finds raising £400 which he kindly gave to them. An enormous amount of money for the family.

It seemed Mary had a knack of uncovering new finds including the long-necked Plesiosaurus,  followed by the ‘flying-dragon’ Pterodactylus in 1828, and Squaloraja, a fossil fish in 1829.  She also found a new, large-headed Plesiosaurus.

Despite some who thought her a fraud (she was not), she was very well liked and found her opinion sought by other learned scientists.

Her life was cut short by breast cancer in 1847. In that time she contributed a huge amount to the fundamental thinking of palaeontology in the C19th.

Charles Dickens wrote of her ‘the carpenter’s daughter has won a name for herself and has deserved to win it’.

Lyme Regis Museum is a great museum which will explain all about Mary Anning and all the wonderful palaeontological finds from the area, follow the link.