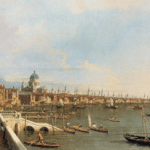 The River Thames plays it’s role in being at the centre of British history as it prepares for the pageant of Her Majesty Queen Elizabeth II, as she celebrates her Diamond Jubilee, with a flotilla of a thousand boats.

The river has been part of the history of the English for over a thousand years, the focus of power at Westminster Palace and at the Abbey, of Royalty at Windsor and Greenwich, of punishment at the Tower, of trade at the London basin, of exploration and science at the Greenwich observatory and so the list continues.

Here are just a few instances of the Thames being synonymous with the making of history:

Probably one of the most significant events with which the Thames is associated with, is the Magna Carta, which was signed by King John in 1215, at Runneymede and which gave to the noble barons of Britain, their liberties.

Over the next centuries there was a continued and enduring use of the river as a place where parliaments in all their guises would meet.

The river, although it is the longest river in England at  215 miles, in global terms it is quite a short river. It’s course follows and creates the borders of nine different counties.

It has been referred to as liquid history, flowing past the great palaces of Windsor, Richmond and Greenwich, through the seats of ancient learning, Eton and Oxford, alongside the seats of parliament at Westminster, past the mints striking the King’s and Queen’s coin, through the commercial areas welcoming ships from all corners of the world and then to the Tower of London, where the river makes it’s sinuous way through Traitors Gate, doing it’s duty delivering the Nation’s traitors to their fate .

It has been the force around which the glorious city of London arose and continues to serve it’s community, hosting Queen Elizabeth II’s Royal Diamond Jubilee Pageant down it’s course.