Part 1 of a series of articles on key concepts principles and stages in the development of Companies Trade, Business and other Organisations, Associations and Institutions in British History

Prior to the companies Acts of 1844 the concept of a company and corporate entity did already exist. The earliest company most of us might have heard of being the East India Company which was incorporated by Royal Charter of Elizabeth I in 1600. Originally named as the ‘Governor and Company of Merchants of London trading into the East Indies.’ 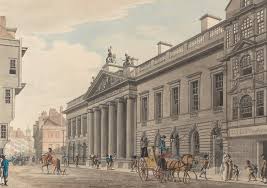 In the 16th century there would be quite quickly a growing number of companies formed to conduct trade and industry on a commercial basis. To see our index of companies organisations, associations and institutions that have had an impact on British History view expanding  our Business Trade and Organisations Theme here

The East India Company was incorporated by way of a royal license (Royal Charter) to trade and develop markets overseas in a specific territory. The legal basis of incorporation changed over time and Joint Stock was a way of helping to spread the ownership of a corporate entity whilst at the same time enabling that organisation (entity) to be able to raise more capital in order to expand its operations and trade in order to generate more profits and/or further capital gains.

Ownership  of the company, organisation or entity is split into a large number of equities or shares (share of ownership) which are sold to generate the capital required to be invested in the entity or company. Examples include the East India Company, Russia Company and the Stock Exchange.

The South Sea (South Sea Company) speculative crisis and frenzy reached its height in July 1720. It was created by the rapid rise in the price of South Sea Company stock following parliamentary approval of a scheme designed to encourage holders of Government stocks to trade it in exchange for company stocks. In effect was designed to help to create a market for public participation and ownership of company stock.

The South Sea Company had agreed  to charge the government a lower rate of interest than the rate it had committed itself to, under wartime conditions. The company bribed prominent politicians and courtiers in the form of notional stock holdings to enable the company to secure the deal despite competition from the Bank of England. In effect they were artificially creating a demand for the stocks.

The Bubble Act 1720 itself was passed as a means of sustaining the price of its shares against its competitors stocks in the market, it required all Joint Stock companies to require incorporation by Royal charter . Clearly this was passed as lawful but was in reality an artificial means of stimulating demand, and creating a barrier to market entry to prospective competitors and showed a parliamentary bias towards the company that would be unthinkable today. But as we know from recent economics all bubbles can burst.

The act failed to maintain confidence in the South Seas Stock and the Bubble well and truly burst. Despite the profound impact this would have on the market, the Bubble Act was not repealed  until as late as 1825. But despite the act the investors concluded that the price had reached its peak and at that point (Sept) of that year, confidence collapsed , many prominent people lost heavily in the crash in the market for the company’s shares, including  George I and leading politicians and financiers leaving many ruined those most involved fled the country ad some were driven to suicide. There is more to consider about the South Sea Company but ehre we are concerned primarily with why the basis of an ‘equitable’ market took time to establish and prevented the faster establishment of Joint Stock Companies. There would of course have been great nervousness after the South Sea Bubble had burst in trading in company stocks and the act remained unrepealed until a century later. This slowed the proliferation of Joint Stock Companies.

This act enabled companies to limit the risks that their investors were exposed to to being to only the value of the shares they held in the company. It was a vital development to broaden the ownership and participation in company ownership. Whilst the acts were consolidated with further legislation in 1857 and 1862, the principles have been fundamental to the development of ‘stock markets’ both in the UK and overseas (exported as with the principles of common law) with the far reaching influence of the British Empire, even after such colonies had been relinquished.

Incorporation  of Companies and Corporate Entities

Incorporation in legal and organisational terms relates to the coming together of of a group of individuals  to form a body, organisation, or company which will be recognised as a separate legal entity from the the individuals that make-up or invest in that body. In relation to Companies and the Joint-Stock basis right up until today the basis of ‘shares in ownership’ a joint basis of investing capital in the company enables ownership and risk to be both spread and limited amongst the members of that entity.  But such legal incorporated entities are not limited to companies, they could be a town, a charity, an institution etc but it relies upon the body of law that regulates and prescribes how that entity can be incorporated as a separate entity.  The ‘members’ in the case of a company are the share holders and there will also be the Articles of Association that establish what the members have agreed the company (new separate legaly entity) can do in terms of business and commerce, but this can also apply to an organisations such as an institution, a civic body, charity, professional organisation and more.

The Joint Stock with Limitation of Member’s Liability, the basis of company formation, with the statutory control of Company Incorporation and Company Law were all essential and key components in the development of trade, business and industry in the growth of Britain before and during the growth of Britain’s economy and its success culminating in the largest Empire on earth during the reign of Queen Victoria. The principles still apply and look set to continue perpetually some 200 years later.

Another principle of Join-Stock that became established was that an individual or number of the many who own the stock should be able to sell their shares without dissolving the separate incorporated Company or organisation. Hence the Stocks held by the Members should be transferable. To ensure that the related company continues to conduct its business day-today, the s’stockholders’ can nominate directors to manage run and operate the business in accordance with the objects (objectives), Articles and Memorandums of Association. This means the elected officers (Directors) can operate the business day-today without continuous recourse to its members as long as it only operates within the law and the articles that constrain what the directors are entitled to do and how they should report and keep Stockholders informed on performance and any changes that are outside of their remit. Hence there can be Shareholder meetings (Stockholder)called annually to renew and authorise the report and accounts submitted by the directors on behalf of its members.

Whilst Share ownership by Joint-Stock is a form of partnership, it is not an unlimited partnership in which the members are jointly and severally liable and this was key because of the unreasonable risks to members if such risks were unlimited in terms of what called be called-upon from other privately held assets, stocks and money if a Company failed.

Partnerships and Associations would also be important but need to be considered for a wider group of organisations than Joint Stock Organisations. The Stock Exchange would be the major institution that would survive together with the Bank of England and Parliament/Government of the day, to manage and regulate the market in those Joint Stocks, the stability of government, the Banks and Money markets on which a healthy stable capitalist-based economy depends. Modern Company Incorporation whether for a private company or a public company still employs the principles that were established to enable Joint-Stock Companies to be formed and operate without the need for a Royal Charter hugely liberated the market to raise capital and is therefore an important element in the development of business and trade as Britain expanded in the 19th century.

You can also follow this series by signing up for our monthly email news letter (see signup on this page.) and/or take a look at our Business Trade and Organisations Theme here or browse and search  our Law and History timeline and chronology here .