Jeremy Bentham was a supporter of women’s rights

Early supporter for women’s rights, an enlightened radical thinker born 15 Feb 1748 in Houndsditch London he lived until 1832, he was ahead of his time a leading philosopher, legal and social reformer. His ideas were influential on many who fought for and developed the basis of social welfare in the UK and he was an early voice for the rights of women. It was in 1918 that he published his work “A Plan for Parliamentary Reform” advocating as part of that plan rights for women.

His ideas influenced the development of the welfare state and he was an advocate for utilitarianism and living life for the greater good. 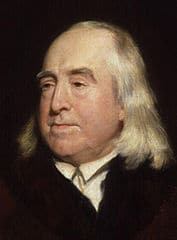 His ideas and support for ideas  included:

A major influence on many leaders of thought and change that were to follow, including  John Stuart Mill; John Austin, legal philosopher; and several political leaders, and Robert Owen, a founder of modern socialism.

He was closely associated with foundation of University College London although it opened after his death, benefitting from his estate, his body was embalmed and displayed on a seat in the college. There is an ongoing project to transscribe the large body of manuscripts led by UCL.

Is this the first milestone in the development and establishment of rights for women in the UK?

If you would like to explore more on Jeremy Bentham and the rights of women you might like to purchase this jstor article The author Miriam Williford asserts that “more than a decade before  Mary Wollenstonecraft had founded english feminism with the writing of  Vindication of the rights of Women in 1792, Bentham, Bentham had pointed out the virtual slavery of women…and in the online Internet Encylopedia of Philosophy which is a good and comprehensive resource.