John Tallis is considered to be one of the most renowned cartographers and publisher of the C19th .

His maps are considered to be the last of the lavishly decorated and ornamental maps, works of art as much of geography.

The intriguing thing is, that at some point, John Tallis made the acquaintance of an engraver called John Rapkin who was an inspiration to Tallis. His stunning illustrations enabled the maps they produced to be beautiful illumanitive works of art.

The maps were surprisingly uncoloured, although when sold colourists were frequently employed to add tints to them.

In 1838, Tallis also produced a series of ‘street views’, of central London Streets, showing detailed views of the fronts and fascades of buildings in central London. These street views have recently been used in conjunction with old maps to produce a sort of historic Google street view of Victorian London. 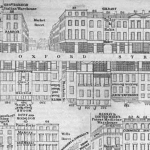