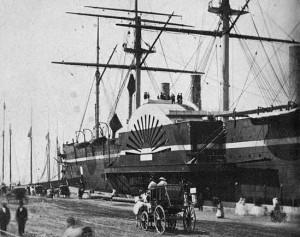 The great iron paddle steamer, designed by Isambard Kingdom Brunel, took eleven days to complete the voyage. It was an expensive ship to operate and was scrapped in 1877.
To see a list of passengers who undertook that voyage and to see passenger lists for other ships arriving into New York from 1827 to 1913, follow the link to see excellent transcriptions carried out by volunteers from the ‘Immigrant Ship Transcribers Guild’.