Duke of Windsor Sends his Best to Winston Churchill

Feb 5, 2015 / Comments Off on Duke of Windsor Sends his Best to Winston Churchill

Duke of Windsor sends his best to Winston Churchill

A Duke gives his own greeting and best wishes to an old friend on his 80th Birthday.

A captivating moment in film history, in the year after Queen Elizabeth II had been crowned, as the Duke of Windsor, formally King Edward VIII (not crowned), reads a somewhat stilted recollection of meeting Winston Churchill and greeting to him on the occasion of Winston reaching 80 years old.  The Duke recollects that before the 1st World War at Spithead , near Portsmouth off the South Coast of England with his father the King (George V.) The met Winston Churchill in July 1914 whilst observing secret fleet maneuvers.

What did Winston think at the time of the Abdication Crisis and after all those years?

Given the difficulties of the Abdication and what we think we have learnt in the intervening years, you can’t help wondering what Winston would have really thought? There are various accounts of why Winston sought to help the King when others politically seemed all too keen to abandon him to virtual exile. Did they think that Edward VIII was someone who might just bee too difficult a king to handle? Some accounts have Winston frustrated and ultim 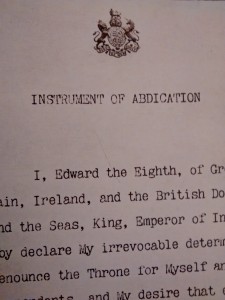 ately angry with the Duke for not sticking to his duty and choosing to place his personal happiness before his kingdom. But can it have been that simple?

The young Prince would have known of Winston for quite a few years.  You can imagine Winston anticipating the future King and the man he might become, maybe just like some elements of the country, or at least the establishment, he felt let down? But why with decades of almost no public statement in Britain at least by the Duke would he choose now or perhaps be ‘allowed to speak out?’ Was he by this time one of the few left alive to have seen at least some of what Winston witnessed? In our new House of Windsor period and as part of our series on Winston Churchill we will take a look at a few of these strands and opposing views and try and find out how much is fact and how much myth or fiction.

It is all too easy to compare with the current generation of the House of Windsor and think was it really that bad that he should have been driven from his throne? The film footage is invaluable even with its clumsy style and arcane accents it gives us just a little insight nto what a different age it was in 1936, if this is as natural as the Duke can be, it must have been a very different world.

But the intriguing part is really why and how does he speak out on Winston’s 80th? Was Winston pleased to hear from him or just reminded of the sad times and problems the Abdication had caused both before during and after its conclusion as war grew closer?  and a Royal Prince had at least been rumored to have been foolishly fraternising with the Nazis.  There was no suggestion he was politically aligned but his reputation was further maligned by even such a suggestion. This may have been as much as a result of his social class and status many individuals in the aristocracy and society circles had been lured into Berlin’s snare.

Winston’s 80th Birthday was celebrated in style with a ceremony that included 2,500 from the great and the good as reported on this BBC post here, a nice touch was:

“As Sir Winston and Lady Churchill appeared through St Stephen’s entrance, a drummer beat out a “V” in morse code – a tribute to the victory salute which became the prime minister’s trademark.”

Hopefully he enjoyed that more than the Graham Sutherland Portrait he was given, which according to his wife Clemmie, he always hated. So much so that she destroyed it after his death some 10 years later. A wanton act of vandalism of an arguably great portrait painter, but you have to admire the spirit.