Seventy five years ago, Basque children fleeing the Nazi bombs in the Spanish Civil War arrived in Southampton on board the  dilapidated steamship the Habana. 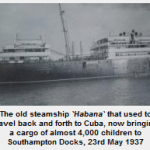 Prime Minister Stanley Baldwin remarked,  “The climate will not suit them”

When Franco came to power he demanded the return of the children, 17000 had gone to France. He published their names in newspapers and branded their families as traitors. It was not a happy homecoming.

Since 2009 a project has been underway to collect and maintain an archive of the lives of  the Basque children which welcomes any information, in particular if anyone has any information about the ‘colonies’ these children were placed in.

Use our free resource Intriguing Family History, to explore more intriguing archives, to extend and enrich your history project