The Removal Act 1795 and its implications for the poor in society.

From the earliest times the welfare and care of the poor in English society was the responsibility of the local civil parish. This in turn was overseen by the judicary at all levels. This may have been a system that worked well when the population stayed local to the place they were born but as society became more mobile then it became more and more difficult to administer welfare to those who needed it. The welfare system was organised through a series of Acts passed by parliament.

The Removal Act 1795, was an amendment to the Settlement Act of 1662 and stated that a ‘non settled’ person could not be removed from a parish unless they applied for relief.

So what did the Removal Act mean for the individual?

Work opportunities was one of the driving forces that made individuals move away from the parish into which they had been born. Many moved from rural areas to urban. Work was as transient as the people were mobile and when poverty became chronic it was necessary to provide welfare to these people. The problem that then arose was which parish would become responsible for them.

The Settlement Act of 1662 was put in place to deal with such a situation but it was a complex Act that was supposed to entitle a poor migrant to receive welfare in the form of poor relief from the parish they were in. There were several ways to gain entitlement to settlement and thus poor relief but the act was in reality one that worked in opposition to giving that provision. It worked to prevent the chronic poor from gaining settlement and therefore they could be removed and forced back to a parish where they had previously been given settlement. The chronic poor were shifted from place to place making it even harder for them to gain employment. Parishes could even expel a stranger because they thought they  might in the future become a burden on the parish. Such was the caring, open, friendly society and although we may stand aghast that such a thing could happen we only have to look at how we treat migrants today, although on a larger scale we seem set to return, remove migrants back to their place of origin or where they were first granted ‘settlement’. However that is to digress.

As the Industrial Revolution geared up so the problem became more visible.

As people moved from rural villages to the manufacturing towns it was obvious that the Settlement Act was not working. Whether the individual was ill or too old or infirm to continue working they were sent back to their home parishes for relief. There was a possibility that the parish could send money to the individual in which case the parish from which he was threatened with removal might let him stay. The situation was very fluid and some parishes were more understanding than others. It is estimated that at the turn of the 19th century, several hundred thousand people were receiving relief from parishes to which they did not belong.

The whole sorry situation was a mess whichever way it was looked at.

What did the Removal Act 1795 achieve?

In a nutshell, very little. The Removal Act 1795, was an amendment to the Settlement Act of 1662 and stated that a ‘non settled’ person could not be removed from a parish unless they applied for relief.

So harrassment of an individual who turned up in another parish demanding their ‘removal’ was no longer allowed but how effective that would be and what recourse there was for such an individual if they were harrassed is debateable.

We would have to wait until the middle of the 19th century before things were taken in hand. In 1834 a centralised poor law system was established. Further acts of ‘removal’ were introduced. 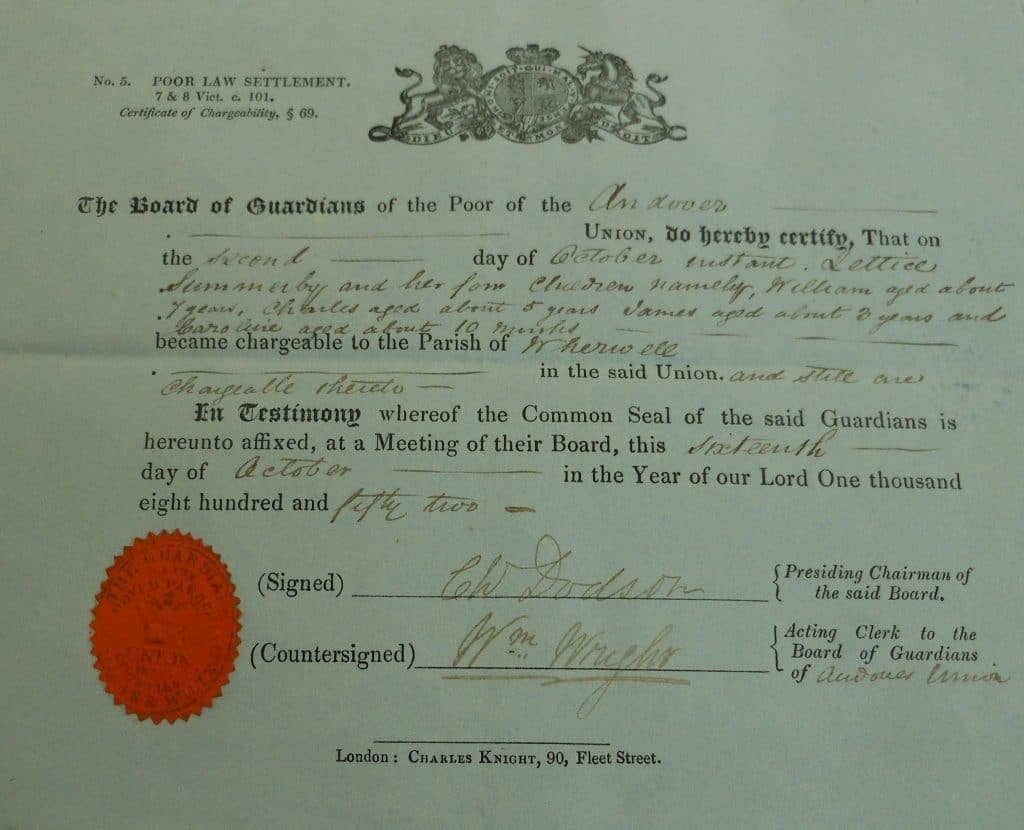 In in the 1850’s people were still needed a certificate of settlement.