The Peterloo Massacre of 1819 was a tipping moment in British history.

The event that came to be called the Peterloo Massacre did not begin with the intention of being a pivotal point in history. On the 16th August 1819 tens of thousands of ordinary citizens of Manchester met in a place called St Peter’s Fields to listen to the political orator Henry Hunt and to state their desire for political reform. Carrying banners asking for universal sufferance, political reform and love, little did they know that the events of the day would reach out into the future of democracy of this country. 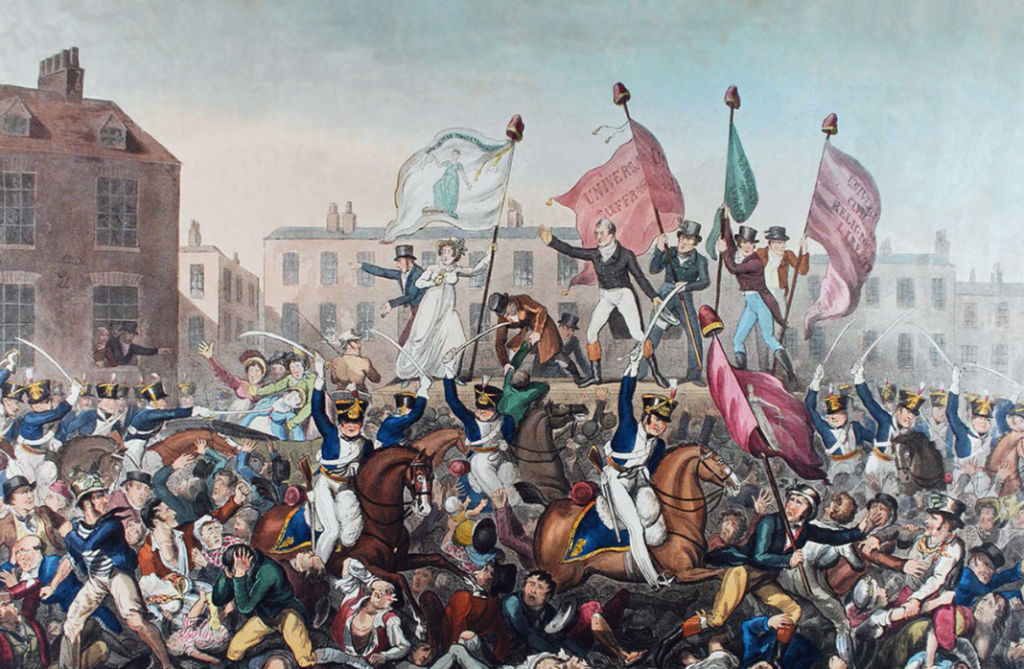 A coloured print of the Peterloo Massacre published by Richard Carlile

Examining the background to the Peterloo Massacre.

Britain at this time was a country facing intense political and social debate. Expansion of ideas industrial, scientific, philosophical and social were mixed with fear of poverty, unemployment and social collapse. There was also an undercurrent of social discord captured by writers such as Carlyle and Dickens who saw society teetering on the brink of some sort of apocalyptic event. Others looked at France and the French Revolution. They saw what ordinary French people had achieved for themselves and they believed they wanted to have a similar voice for  British workers. They wanted change, change in the parliamentary process so that ordinary people were represented. They wanted an end to the unfair electoral system with its Rotten Boroughs. They wanted fair representation in their parliament, reform was their watch word. What these reformers hadn’t understood, was the threat felt by those who had been in power for hundreds of years. These were families whose wealth and entitlement was completely bound to this unfair system. The whole of society had reached a point of anxiety, all fearing the loss of something.

The post war period following the ending of the Napoleonic War was a period of social upheaval. Troops returned home looking for jobs that didn’t exist and were trying to find a way to fit back into society. Society itself was in a period of flux. It was struggling to meet the demands of an exploding population. Housing shortages, employment shortages and food shortages began to put immense pressure on the poor working classes. All this and more coalesced and gave rise to a muddled and chaotic political crisis which lurched from one ill conceived response to another.

Britain appeared as two nations, one intent on luxury and spending beyond its means, the other trapped in poverty and inequality by events out of their control. The national post war debt stood at some £800 million. The fear of the radicals was that the ordinary labourer would be made to pay that debt through increased taxes and cuts in pay and the rich would be protected from it. Henry Hunt who would speak at St Peter’s Fields, saw corrupt taxation as being at the root of the problems the country was facing. He saw the rich and privileged turning their collective back on the situation. He was not alone in these thoughts. The Government saw the end of the war as an opportunity to get rid of the ‘military’ to reduce debt. They quickly de-mobbed the troops who were then unemployed and had no money to spend. An economic slump seemed inevitable. A food shortage forced prices up and agricultural workers had to contend with enclosure. They lost the right to do for themselves and were forced back onto meagre wages.

Real and perceived problems and a woeful muddle.

The real problem was a working population who daily felt the pain of unemployment, hunger and disease but had no voice.

The perceived problems were caught in the writings of people such as Malthus. In his earlier work ‘An Essay on Population’ he described the exploding population of Britain as charting a course of an inevitable cataclysmic event. This led to the conclusion that poor relief would only exacerbate the situation and the conclusion was to do away with poor relief. Many of those that believed in such a scenario were in government. However radicals were also wound up by their own intransigent rhetoric and were split as much as the Whigs and Tories. Radicalism focused on attacking corruption and unfair taxation.

Demands were made for constitutional change but those making these demands created an economic havoc that damaged the ordinary people they were seeking to represent. The poor workers were manipulated by their own side as much as those they sought to oppose. The country was in a terrible mess, all groups were distrustful of each other and split amongst themselves. If ever there was a moment for revolution to explode, this was it.

Other demonstrations had been taking place in other parts of Britain. Earlier in the year East Anglia saw a number of disturbances in towns. They occurred because people were starving and felt they had no other choice than to take their plight onto the streets. When these rioters were brought to trial, five were executed, another five transported and others sent to prison. 1816 is known as the year without a Summer. Climate change brought about by volcanic activity caused lower than usual temperatures and rain. The harvest failed and life became a struggle for the poor. The stage was set for revolution and this is what the Government feared. 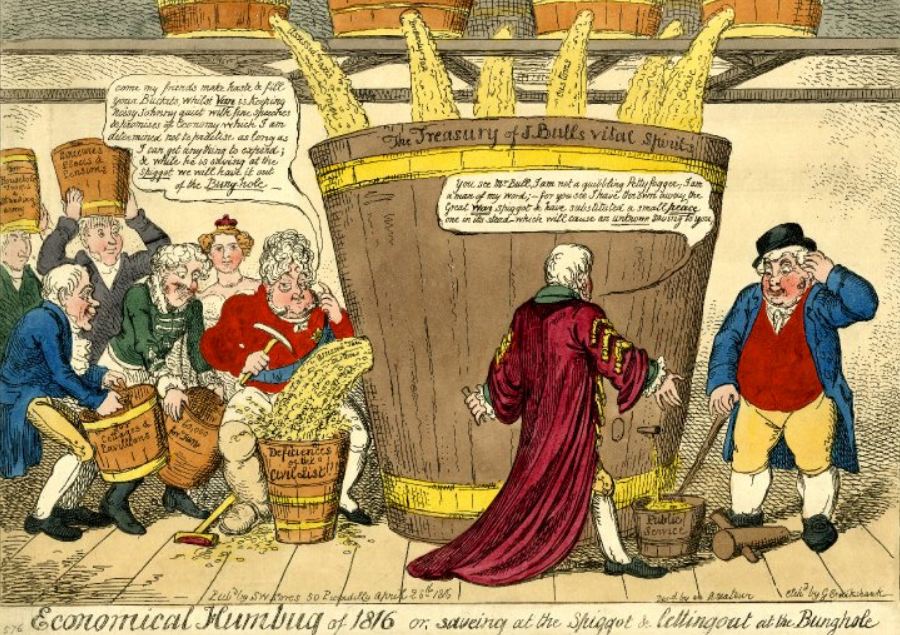 “Economical humbug of 1816 or, saveing at the spiggot & letting out at the bunghole” (April 1816) by George Cruikshank. Here Cruikshank criticizes the government for what he perceives as an imbalance in spending. The Regent, Princess Charlotte, Lord Castlereagh and others are stealing public money for their own wants and desires, with very little money going towards “Public Service.”

The day of quiet demonstration.

The day of the 16th August 1819. Families including women, children and men made their way to St Peter’s fields. It was a trip out, a moment to leave factory and home and unite together. The crowds had been encouraged to gather by the Manchester Patriotic Union. The speaker was the orator Henry Hunt. Hunt was a radical speaker and agitator, who advocated parliamentary reform and who worked hard for the working class. His attendance, as much as anything, caused concern amongst local dignitaries. Enough fear and bigotry left local magistrates, alarmed and nervous by the demonstration and they called out the local Yeomanry to arrest Hunt. The situation was completely mismanaged, the Cavalry were called, over a thousand soldiers tore through the crowd, hell bent on doing what damage they could. By the end of the day at least 11 people lay dead and hundreds were injured, some of them disabled for life by the injuries they received.

The name ‘Peterloo’ was first coined five days after the massacre by the editor of the Manchester Observer. It was a bitter pun, comparing the cowardly attacks by the Yeomanry and soldiers on unarmed civilians to the brutality suffered at Waterloo.

A pamphlet was written to reveal the names of those killed and injured in the massacre.

Demonstration and rebellion was not a common occurrence in Britain but neither was it unheard of. The disproportionate response by the military forces, shows just how frightened those in government were of the collective power of the people. The shocked response to the killing of innocent people was equally great. The Peterloo Massacre seemed to have brought people to a position where to go any further would lead to revolution. This was something nobody in the country really wanted.  In 1820, John Cam Hobhouse a politician and friend of the reforming Lord Byron, joined efforts with other radicals to establish the Metropolitan and Central Committee. The aim of this committee was to get compensation for those injured. The members prepared a pamphlet setting out the Committee’s ideas for justice. Reading this document today, which is available via the British Library website, it seems almost impossible to imagine such a thing happening in Britain.

What happened after the Peterloo Massacre?

Many of those caught up in the massacre lost their jobs. Tory factory owners who considered the behaviour of those attending as seditious were not prepared to have them back at work for fear of what actions they might stir up amongst their fellow workers. How were they identified? By their wounds.

Henry Hunt was jailed for two and a half years before becoming an MP.

Robert Peel used the massacre to call for a standing police force, observing that reliance upon a voluntary yeomanry was fraught with problems.

No reform after the massacre.

However as much as Peterloo and its aftermath shocked the nation, it did not lead directly to parliamentary reform. No charges were ever brought against those who killed and maimed.

The Duke of Wellington warned.

Parliament held off offering any measure of reform for nearly fifteen years and even then it was not a reform that would involve the poor working class. It was decades before working men were given any measure of a vote and women would have to wait just over one hundred years.

Fear of revolution kept the working classes suppressed. The suffering of people during the following decades was largely ignored by industrialists and landowners. Slowly groups of Evangelists decided to save the souls of the poor and the call to reform working conditions began. 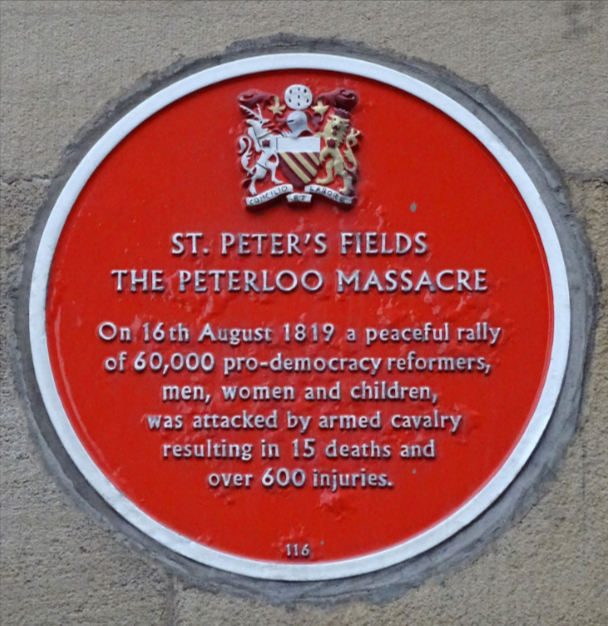