In the last years of the C14th disagreements began to emerge between Owain Glyn Dwr, a descendent of Lllewellyn The Great, Prince of Wales and the Marcher lords, who held land and privileges over the border marsh lands between England and Wales.

This disagreement was the closest Wales ever got to overthrowing English rule since it had been conquered in 1282 when Edward I marched his armies in and defeated the Welsh lords.

Owain Glyn Dwr was born around the 1350s into an Anglo-Welsh gentry family.

Maybe this exposure to the English army, convinced him there was an opportunity to be taken because when he retired to his estates in Wales, he escalated a land dispute with a neighbour Reginald Grey,a Marcher Lord, that then grew into a more organized rebellion.

When Richard II  was overthrown by Henry Bolingbroke in England and English lordship in Wales collapsed, Owain allied himself with England’s enemies including the French, the Scotts and the native Irish and sought to grasp power for himself in Wales by proclaiming himself ‘Prince of Wales’. 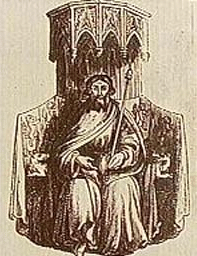 Henry V, then Henry, Prince of Wales, took over the campaign but chose a more successful method of warfare, that of attrition. He left a relatively small army in Wales whose aim it was to remain in constant conflict with the rebels, led by Glyn Dwr, who was still drumming up support form England’s other enemies. The attrition included an economic blockade and it was this that quite possibly was the ultimate undoing of the Welsh. Using the castles that remained in English control he gradually began to retake Wales while cutting off trade and the supply of weapons.

Henry then did a very clever thing, he drew the Welsh into the fold, whereas before they were at the margins of the Kingdom, Henry now recruited many Welsh soldiers into his ranks, to join him on his campaigns in France.

What became of Owain Glyn Dwr and his claim?

He is last mentioned in papers in 1416 when terms were offered for his surrender but after that there is no more mention of  Owain Glyn Dwr, the last to claim the title of independent Prince of Wales.