Emigration from UK after 1830 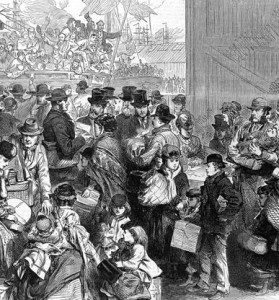 The agricultural depression in the UK in the early part of the C19th resulted in many people emigrating from those counties worst hit by, the counties of Kent, Hampshire, Sussex, Cornwall, Dorset, Devon, Yorkshire, Derbyshire, Cheshire and Cumberland all saw the numbers of those leaving increase dramatically. Many went to America and worked in agriculture there.
The American census of 1890 showed that 90,000 farmers and over a 1000,000 labourers had been born in England.
Consider looking in America for families from these counties who have ‘disappeared’ from UK census returns, they may well turn up in the American census in later years, still working in agriculture.