In 1859 Charles Darwin published ‘On the origin of species by means of natural selection’, usually known as the ‘Origin of Species’.

The great tome, the Origin of Species, began life as the twenty eight year old Darwin scratched a note to himself

one species does change into another

Darwin was young, he knew he was on the brink of something profoundly world changing but he held himself in check and carried on gathering data for a further twenty years. When he finally published his work, The Origin of Species, it was the result of the most painstaking, methodical approach possible. Indeed he took so long to reach the point of publication he was in danger of being pipped to the post. Others were also following an ‘evolutionary’ route, in particular, a poor land surveyor from Wales, Alfred Wallace. He had reached a very similar conclusion to Darwin and was jointly published, an excellent account of his involvement can be read hear. 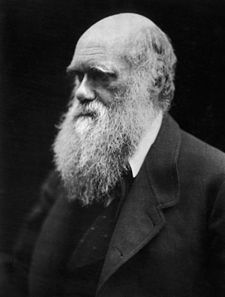 The Origin of Species is quite probably the most influential scientific book ever written. It has shaped the science of biology ever since and opened new avenues of research. It was simply the start of something much bigger.

In a nutshell then,

To find out more about the amazing life of Charles Darwin visit the Natural History Museum..