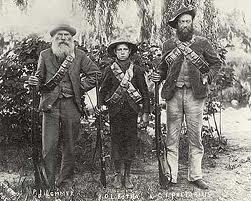 There were two Boer Wars  1880 – 1881 and 1899 – 1902, fought between the British Empire and the the two independent Boer Republics, the Orange Free State and the Transvaal of South Africa.  It was the first military clash of the C20th and the Boers fought with guerilla tactics. The British response was swift. Lord Kitchener, the new British Commander ordered a ‘clean up’ and livestock, crops, homesteads and villages were killed and burnt. Women and children were herded into camps. The beginnings of the horrors of C20th warfare had been set in history.

Conflict between the British and the Boers: