Gas lights and the lamplighters 1807

Gas lights and the lamplighters of London, the glow of  Victorian London

Gas lights and the lamplighters of London are for many of us synonymous with the swirling fogs of the Victorian city and the soft green lights emanating from the gloom.

It is hard for us to imagine a town or city without street lights or even the glow of electric lights from windows. Imagine the fear felt of walking on unlit streets. The first ‘parish’ lamps were fueled by oil, usually stinking fish oils, with a wick. London was lit by hundreds of these oil lamps but it took the inventions of the Industrial Revolution to bring about the gas lights that would light the streets of London.

Gas lights and lamplighters part of the Industrial Revolution

The Soho Foundry in Birmingham was a hot house of ideas, with Matthew Boulton and James Watts pushing ahead with machines for the Industrial Revolution

A man called  William Murdoch was working there and experimenting with fuels of various sorts, including those generated from coal. He used this coal gas to light his own home, the idea was seized upon and the London and Westminster Gas Light and Coke Company was established and on the 28th January 1807, Pall Mall was lit up. The gas lights would transform the city into the most dazzling place on earth. Lighting the rest of London was seen as an important issue. 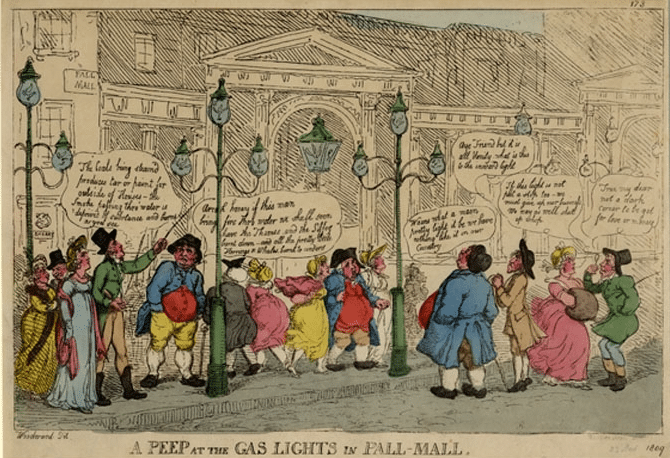 Thomas Rowlandson on the Gas Lights 1809

The warm glow of gas light didn’t necessarily bring a warm glow to all concerned, as Hansard reports, when the Gas Light Bill of 1819 was debated there were dissenters.

‘he was not very friendly either to Gas Lights, or Water Work companies—not that he was hostile to the ingenious improvements or discoveries, by which the public had derived great convenience; but his dislike arose from the way in which these companies conducted themselves.’

‘had no partiality for the fire and water companies. By their conduct, they were a nuisance to the public. In his opinion, all the competition or rivalry which they produced was the rivalry of who should pull the pavement most violently to pieces.’

‘The advantages derived from the application of gas were manifest. Besides the great convenience to the public, by rendering the streets,453squares, and passages, light as day, gas was highly advantageous to the police.’ 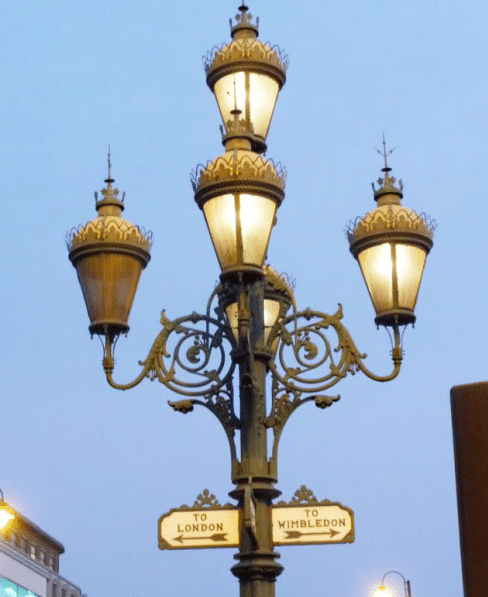 The role of the early lamplighters

The early lamplighters carried their ladders, wick trimmers and whale. Setting out just before dusk, dressed in hat and coat, with a cheery whistle or song to let the public know that they were in the vicinity, they undertook their essential role and then returned at dawn to extinguish the light. The role didn’t change much with the onset of gas lights except they had to take care not to get blown off their ladders from a build up of gas in the bowls.

The lamplighters acted as night watchmen and were for the most part considered very steady, trustworthy men.

They took great pride in this, there were lamplighter families, where the job was passed from father to son. Lamplighter families were a close knit group of proud individuals. They frequented particular public houses and had their own traditions, lamplighter families frequently made marriages between each other. In all they performed a very important role in the city and brought some measure of reassurance and safety to the people who lived there.

There are still over 2,000 gas lights in London lighting the darkness with the soft green glow

Find out more about the history of one company William Sugg and Co, who still maintain the gas lights outside Buckingham Palace 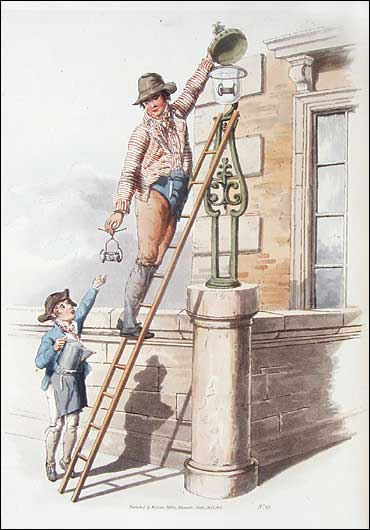