Ethel Mary Charles and her sister Bessie, trained in the late C19th with the architectural partnership of Ernest George and Harold Peto. 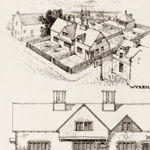 In order to become qualified, the women needed to study at the Architectural Association School of Architecture.

Ethel was refused entry because she was a woman. The role of architect was not seen as a female occupation.

She studied instead, at the Bartlett School of Architecture where she excelled, receiving distinctions in her exams

Ethel then passed her Royal Institute of British Architecture exams but still, the male opposition to her entry into the institution, made for an uncomfortable final acceptance, into the RIBA, in 1898.

She was the first female member of the RIBA and her sister was the second in 1900.

She was particularly influenced by the Arts and Crafts movement but her interests in major building developments were never fulfilled.

The male architectural community made sure that her work was limited to cottages and small scale constructions but at least the barrier to women architects had been breached.

Women in middle class Victorian Britain were becoming increasingly frustrated at not being able to gain acceptance in male dominated institutions and many had for years worked closely alongside men, doing innovative and important work but without the recognition deserved.

The case of Mary Anning Paleantologist