This act was originally designed to stop in it’s tracks the activities of the Resurrectionists, who due to a shortage of cadavers (human corpses) for genuine medical research were resulting via illicit means to sourcing bodies for dissection by digging-up ‘resurrecting’ newly buried deceased paupers bodies.

The Act was first placed before parliament in 1828 but failed to get passed. It was the work by Herbert Mayo, physician and Fellow of the Royal Society and an accomplished neuro-anatomist, who urged the government to reconsider it’s position following the murder of an Italian boy. His work resulted in the Anatomy Act 1832. The whole story can be read by clicking here.

The ‘Body Snatchers’ were always lurking in the shadows behind human dissection and became particularly notorious  with the activities of the murderers Burke and Hare around 1829-1830 in particular. 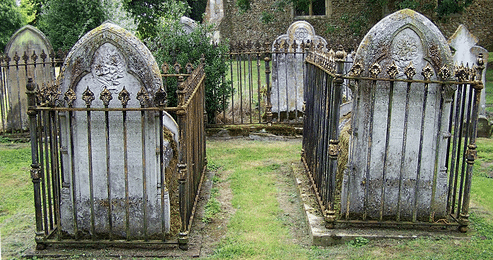 Iron Rails around graves to deter the Resurrectionists

Whilst the Poor Law was still sentencing less fortunate souls to a life of near penal servitude the law was at last starting to recognize their rights at least when dead. A grim and bleak fact when we look back with the benefit of hindsight perhaps but a reality as well. When reflecting on so many lives lived at less than a subsistence level we might do well to reflect on the need to balance in a democratic society looking after those less fortunate and also enabling them to help themselves because no doubt the Workhouse regime was founded on such noble and draconian assumptions, whatever your politics we might do well to remember and reflect on this.